Exploding with joy in the year of return 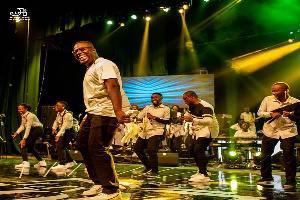 The Explosion of Joy concert

This year’s ‘Explosion of Joy’, the annual concert by Joyful Way Incorporated, was one encounter that will be treasured for a lifetime in the hearts of all the worshippers that gathered at the National Theatre on Boxing Day 2019.

Patrons from a multiplicity of nations and spheres of life filled the auditorium to offer thanksgiving by raising their hearts and voices, lifting up praise and worship to the faithful God.

Founded in 1972, Joyful Way Incorporated is a group made up of Christians from various denominations under the same faith, serving the same God. With their core mandate being to proclaim the gospel of salvation through the redemptive work of our Lord Jesus Christ and to encourage revivals among Christians, they use music as their major means of evangelism.

Explosion of Joy which usually runs two sessions – afternoon and evening – pulled thousands of ready worshippers into the auditorium at that time of the year when everyone anticipates in their hearts every second of thanksgiving and praise they have to bring to the Lord for His goodness and mercies.

Since Ghana has designated 2019 as the Year of Return to commemorate 400 years since the first enslaved Africans arrived in Jamestown, Virginia in the United States, the government has been running a massive marketing campaign targeting African Americans and persons of African descent in the diaspora.

Explosion of Joy, thus, afforded the Ghanaians, and indeed Africans, the wonderful opportunity to gather and express our immense gratitude for all these years of emancipation the African continent has enjoyed.

This year’s event themed “The Living Word”, in celebration of the Word of God that is alive and sharper than any double-edged sword, was jam-packed and refreshing. Beginning from the evidence in how the car park got “littered” with vehicles that had travelled miles and miles to be present, to the tangible joyous atmosphere in which we ushered ourselves into the presence of our heavenly Father.

The concert began with some soulful jazz music and Christmas tunes from Leslie de Psalmist and the Flute in Worship crew.

Staying relevant all these years means that Joyful Way Incorporated has some form of succession structure in place. Thus. the Joyful Way Phase Two Choir, made up off students from some second-cycle schools, officially opened the concert with some wonderful performances.

The Joyful Way singers then took to the stage, leading congregation in Praises and adoration with some of the group’s most popular songs as well as other public domain songs of Praises. And, although it was a seated event, patrons stood almost throughout the sessions, singing and dancing to the glory of God.

“EXPLO 2019 was something else. The range of music was incredible. From the ‘junior’ Joyful Way all the way through, there was something for everyone,” so testified Rev. Prof. Nii Adote Abrahams, an Economics professor at the Missouri Southern State University who was present at the event. 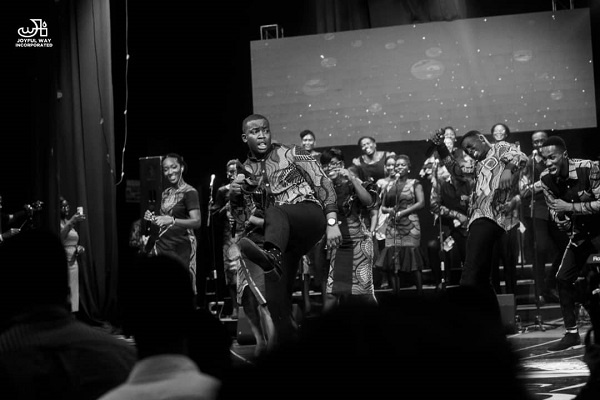 Ministering in this special “Year of Return” edition was another evergreen group of talented Ghanaian Gospel musicians, Daughters of Glorious Jesus.

Their debut album “Anwanwa Do” was released in 1990. Since then, the Daughters of Glorious Jesus has won awards consistently through a number of albums and hit songs. Nearing three decades in the gospel and Christian music industry, they are an easily recognizable name in Ghana producing hit songs that have become congregational praise and adoration songs like ‘Bebree’, ‘Yesu Fata Ayeyi’ and ‘Aseda ben’ to name a few.

You could feel the excitement when they took to the stage and led worshippers in thanksgiving and praise to God with these very songs.

As the pioneer of contemporary gospel music in Ghana, Joyful Way Incorporated currently has fifteen albums to its credit with the most recent being ‘Grateful Hearts’ released in 2016.

The group has also been privileged to win many awards, with some of them being the MTN Ceval Gospel Awards (2007), Unity Awards (2003), Best Mass Ministry and Best Packaging and Sleeve Design (for ‘Barima Yesu’) at the Ghana Music Awards (2003), Most Outstanding Group at PAFAM (1990) and Best Gospel Group in Ghana by ECRAG (1988).

This Year’s Explosion of Joy brought together beautiful souls that gathered in gratitude to God for how the year has gone. You could tell from the joyful smiles on the faces of congregants when the event sadly had to come to a close and these persons made their ways back home.

One such joyful patron was Mr. Daniel Boakye who had this to say, “For me this is the best so far. I have been absent for a couple of years, so I am not necessarily comparing it to that of last year…I appreciated the presentation on the outreach activities. It makes me feel that through my cash contributions I can be considered as a real associate of ‘Joyful Way’. God bless you all for the good work.”

Next year promises to be another exciting edition that you surely would not want to miss.

Absa promotes its digital banking ahead of Christmas festivities-Ghanatoday.net