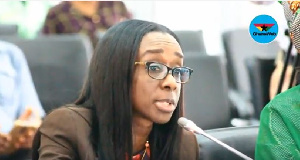 Delese A. Darko, CEO of FDA

The Acting Head of Food Division, of the Food and Drugs Authority, Roderick Daddey-Adjei, has said that despite the seeming loopholes in the FDA being able to fully fulfil its mandate, of protecting public health from unhealthy food and pharmaceutical products, his outfit is well poised with the necessary infrastructure to curtail the increasing concern of unhealthy food and drugs infiltrating the Ghanaian market.

“Ghanaians should not just throw up our hands in the air. We are letting you understand that Ghana FDA is one of the strongest regulation bodies on the African continent. Our labs have the largest scope of tests done on products. There are a lot of good works going on,” he stated.

His counterpart Jacob Amoako Mensah, who is the Head of Operations, Imports and Exports Department of the Food and Drugs Authority also revealed that an interim regime is in place to scrutinize all tomato paste products whether registered or non-registered which make it through the ports as an effort to get rid of all such products.

“As a part of the port community we made an application to National Risk Management Team for them to make all tomato paste coming to the country go through Risk Channel Red enabling the FDA to inspect them whether they are registered or unregistered,” he disclosed.

They made these assertions in addressing the recent announcement made by FDA to recall some 16 brands of tomato paste which were described as unwholesome for public consumption.

The two FDA officials, together with Dr. Vitus Victor Anaab-Bisi, the Head of Medical Services, Ghana Ports and Harbours Authority, were engaged in an Eye on Port panel discussion on Healthy Trading and Lifestyle in this Festive Season.

Roderick Daddey-Adjei revealed that 70 percent of tomato paste products the FDA had sampled from its market surveillance were found to be unfit for the market, and according to him, the Authority is embarking on a revolution in the tomato paste industry in order to salvage public health.

He said the FDA is in the process of announcing many more food products unfit for the market, and urged the public to be on the lookout as they make their buying choices moving forward.

“Right now for the 16 brands that we have picked and released as unfit for the market we have also discovered other brands that are not part of the 16. The chief executive will announce it later on,” he disclosed.

Jacob Amoako-Mensah, attempted explanation on how such products find their way into the Ghanaian Market as his outfit is supposed to prevent the importation of such products.

“We have not seen these products at the port. Our borders are porous: there are various routes in which products come in,” he explained.

He disclosed that the FDA would commence the implementation of more stringent measures at the ports against the importation of unhealthy products.

“Very soon every product that comes into Ghana will have to be given a permit and approved before it sets sail,” he revealed.

Dr. Anaab-Bisi who opined that Ghana’s borders are not secure enough to filter what comes into our market, cautioned consumers of all food products to be more careful about what they consume.

Dr. Anaab-Bisi explained that food is a very vital component of human life and should be taken more seriously.

“Poor eating can lead to stress, it can also lead to depression and other chronic diseases such as hypertension, kidney problems, tooth decay and many more,” he educated.

He said the treatment should be the same in the case of medicines, as the health sector is also faced with the problem of counterfeit drugs, which he revealed is gaining public momentum.

“Fake drugs are even turning out to be more lucrative than hard drugs,” he added.

He said the seemingly lucrative business venture of “fake drugs”, is one that sparked a needful reaction from the port community.

But, the Head of Food Division, FDA, said changes in the Public health act criminalizes some of the activities regarding trading in fake drugs including jail sentences and the FDA will ensure its implementation.

“We should have looked at crime and that is why the Public Health Act is such that when caught in this, you can even be imprisoned for about 15 years,” he stated.

He said collaborations with the police, judiciary as well as other key institutions are gradually tackling these crimes aggressively.

He also revealed that monitoring schemes through the district assemblies are in place to also address the issue of unfit products on the market and lamented about the abuse of personal effect regime which is making it more difficult to fully restrict certain unregistered goods from reaching the market.

On the issue of having unwholesome food products making it through auctions at the ports, Jacob Amoako Mensah said although they have mostly enjoyed good collaboration with customs, sometimes, they are not invited to test products before auctioning them.

Dr. Anaab-Bisi revealed that traders, both the legitimate and malicious ones, cash in on the festive periods to propagate their goods irrespective of health implications hence urged all citizenry to be observant in this season.

He said a lot of chronic illnesses people contract are as a result of lifestyle choices, where food is a major component.

He also explained the need for labels of food products to accurately detail all ingredients used in its manufacturing so as not to mislead consumers, of whom some may have severe allergies.

Dr. Anaab laid special emphasis on parents to lead the lifestyle drive in the society and advised the public to call at recognised and certified medical facilities as soon as they suspect to be reacting negatively to the intake of any food or drugs.

“If you are sick outright then the hospital should be your first point of call. Let us not go for local remedies but we should go to the hospital and seek for professional advice,” he stressed on.

7 reasons why eating ‘Wele’ is DANGEROUS