Make Africa the Place for Investment 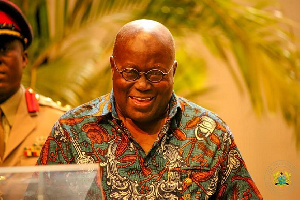 President Nana Addo Dankwa Akufo-Addo has appealed to foreigners of African origin who have heeded to “Year of Return” initiative and have visited Ghana to help make Africa the place for investment and economic development.

Addressing attendees of an event organized by the British High Commission for all people who are in Ghana as part of the “Year of Return” and themed “Beyond the Return, the Diaspora Dividend”, President Akufo-Addo indicated that just like Chinese Diasporans were at the forefront of the economic revolution of China, African Diasporans can do same for the African continent.

“Let us all remember that the destiny of all black people no matter where they are in the world is bound up with Africa. We must help make Africa the place for investment, progress and prosperity and not from where our youth flee in the hope of accessing the mirage of a better life in Europe or the Americas” President Akufo-Addo said.

According to the President, history has it that Diasporan communities have had a positive impact on the development of several countries through increased trade activities, rising investments and transfer of skills and knowledge. Citing the case of China, the President noted that “with an immigrate population of 60 million, the Chinese Diaspora is side to be the 25th largest country in the world who according to the” Nikkei Asian Review” own assets worth 2.5 trillion United States dollars”. The President went on to say, “when foreign companies in the late 1970s reduced their investments in China, it was the Chinese Diaspora that shored up the economy.

According to the Washington DC-based migration policy institute, half of the foreign direct investment, that is, 26 billion United States dollars that transformed China into a manufacturing power house in the 1990s originated from the Chinese Diaspora”. The Chinese example the President indicated must inform the relationship that African Diasporans must develop with Africa.

“As we draw the curtain on this bold initiative, we should now look beyond the return and build on the dividend chocked. The time has come to engage Africans in the Diaspora and all persons of African decent more positively in areas such as trade & investment cooperation and skills & knowledge development” President Akufo-Addo noted.

2020 in politics: Adam Boulton's guide on what to look for | Politics News