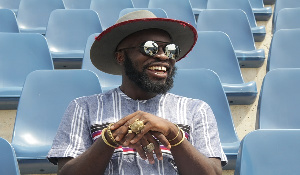 In the Ghanaian music industry where some musicians would sell their mother for a shot at success, it’s ironic to learn that some musicians “made it” almost accidentally.

Rapper Kwame Ametepe popularly known as M.anifest is among some prominent folks whom fate or circumstance propelled onto the stage and into the limelight, often despite their having zero prior musical experience.

Sitting down with Leticia of Lit TV, the ‘GodMC’ spitter mentioned that his profession as a musician was by accident.

He mentioned that although he has carved a niche for himself in the music industry, he never dreamt of becoming a musician as a youngster.

M.anifest stated that during his childhood days there was no single day he made his mind to pick the microphone to entertain people with his craft.

According to the Madina-based rapper, recording songs, mounting stages and touring the world with music happened to him by accident.

The decade in Maine news and politics

Travelling from Togo to Ghana - horrors on the road

FLYING OUT OF GHANA AFTER THE BORDERS OPEN | WHAT TO EXPECT-ghanatoday.net

Period politics is stuck in the past | Women