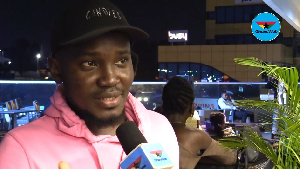 Contrary to suggestions Sam George went overboard with his decision to engage Charterhouse over OB Amponsah’s appearance on the ‘Night of 1026 Laughs & Music’ stage, the comedian has lauded the legislator for rather dousing the flame of threats and insults thrown at him by some members of the opposition National Democratic Congress (NDC).

Following a joke about the party’s flag-bearer OB Amponsah told at this year’s Decemba2Rememba, some members launched scathing attacks on the comedian as they argued that he intended to make the politician unpopular ahead of the 2020 elections.

OB, on the night, had made light of many things, including names and meanings as well as the impact of names on people where he mentioned that the name ‘Mahama’ is synonymous with corruption in Hausa.

Although an official apology was issued on December 26, Sam George, Member of Parliament for Ningo Prampram in a Facebook post said he had “had a chat with management of Charterhouse Ghana over the appearance of OB Amponsah” at ‘Night of 1026 Laughs & Music’ and expressed “discomfort and strong displeasure at his tribal and partisan diatribes against the person of the former president.”

While stating that he would attend the show, the lawmaker announced his resolve to “stage a massive protest if OB misbehaves.”

“He is entitled to hold his personal views no matter how twisted they are but cannot use a paid-for platform to disseminate same. I have the assurances of the organizers that they have since my conversation with them had a talk with him that their platform would NOT be used to peddle such material. I have the assurances that Charter House remains a Ghanaian business entity that is apolitical”.

Speaking to GhanaWeb on the sidelines of ‘Afro Jazz Comedy Night’, OB Amponsah said there was an interaction between him and Sam George after the Charterhouse event where the legislator made him realize the implications of the joke he told about former president John Mahama.

“Through him, I realized we were in some kind of political tension. We’re voting next year. If this joke had been told in 2017, it wouldn’t have made this wave than now because of the tension. So he told me these times are hard times, you don’t just tell some jokes, you have to be very circumspect. He really advised us. I thank him for coming for the show and calming nerves. He could have done worse,” OB said.

In contrast to claims he aimed at denting the reputation of Mr. Mahama, OB said the joke was without malice.

He said: “It was a joke that treaded on a thin line. It was not to make him unpopular. I’m not a politician; I don’t even vote. It was a sensitive joke I told. It went down with the audience at the auditorium but later after a bit of assessment, people realized it was quite too far, it was quite an affront to the former president’s dignity. No malice intended to make mockery of the former president.”

Motorcycle gift puts Boris Johnson back on his bike | Politics

Thousands Turn Up For Kingdom FM Health Walk In Kumasi