For many, the year 2019 had echoes of the protest movements, dubbed the Arab Spring, that gripped the region eight years ago.

Mass demonstrations broke out across Algeria, Sudan, Iraq, Lebanon and Iran as citizens rallied against their governments over corruption and stagnant economies, among other issues.

Elsewhere, the long-running humanitarian crisis in Yemen and the Israeli occupation of the Palestinian territories were overshadowed by tit-for-tat oil tanker seizures, which marked a rise in tensions between Iran and the West.

Here are some of the key events that shaped the Middle East and North Africa in 2019:

Tens of thousands of Algerians took to the streets in February after it was announced that longtime ruler Abdelaziz Bouteflika would run for a fifth term in office. In April, as demonstrations continued nationwide, Bouteflika resigned after military chief Ahmed Gaid Salah called for his removal, but the demonstrations continued as protesters demanded root-and-branch political reforms.

Presidential elections were held in December despite opposition from the protest movement, known as the Hirak, which dismissed the Bouteflika loyalist candidates as part of the old guard of ruling elites. 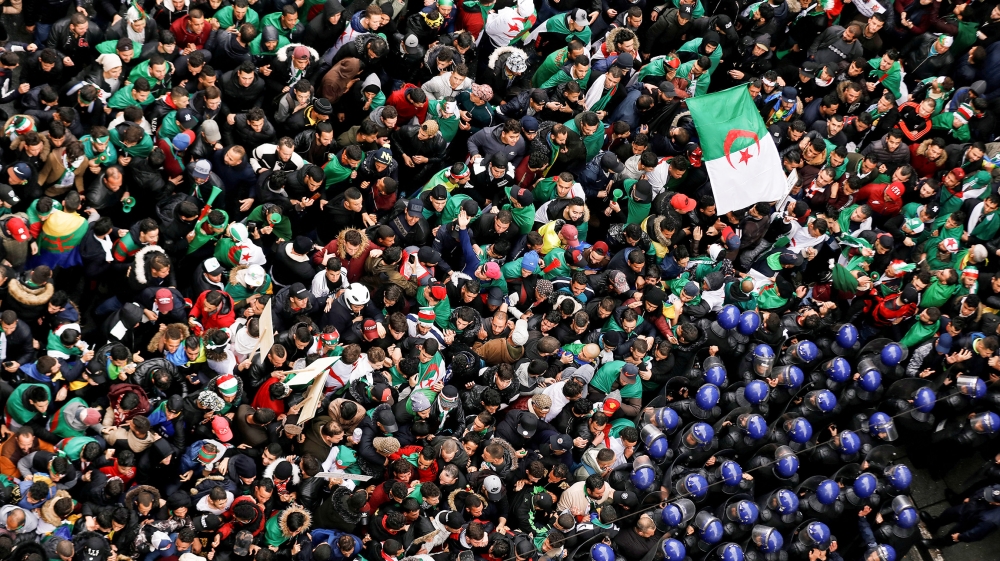 Elsewhere, Sudan’s longtime leader Omar al-Bashir was removed on April 11 after almost 30 years in power following months of anti-government protests that began in December 2018. A deadly attack in June on a pro-democracy sit-in at the army’s headquarters in the capital, Khartoum, in which at least 120 protesters were killed, marred the largely peaceful protest movement.

A transitional government was sworn in in September, with elections set to be held in 2022. 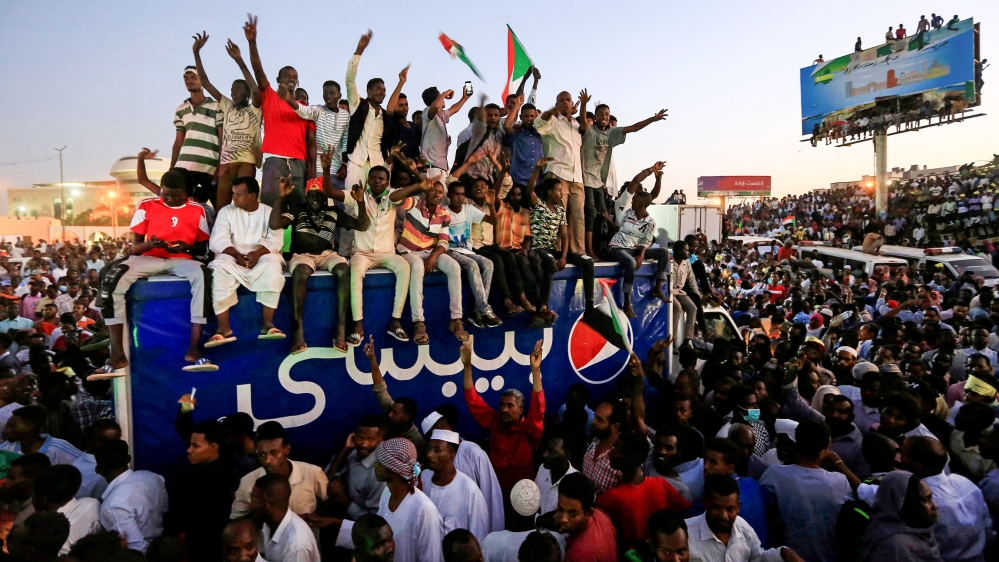 Meanwhile October saw the largest civil protests in Iraq since the fall of former leader Saddam Hussein in 2003. Dubbed the Tishreen Revolution, the protests started in the capital, Baghdad, but quickly spread to other provinces.

Beginning with calls for an end to corruption, unemployment and inefficient public services, the protest movement escalated into calls for the overhaul of the country’s political system, as well as an end to Iranian interference in Iraqi affairs.

Iraqi Prime Minister Adel Abdul Mahdi resigned in late November, but he has remained as caretaker leader while the leading parliamentary blocs have struggled to agree on a successor.

October also saw the eruption of mass protests in Lebanon, where citizens demanded the overhaul of the country’s confessional political system, in which power is apportioned among religious groups. 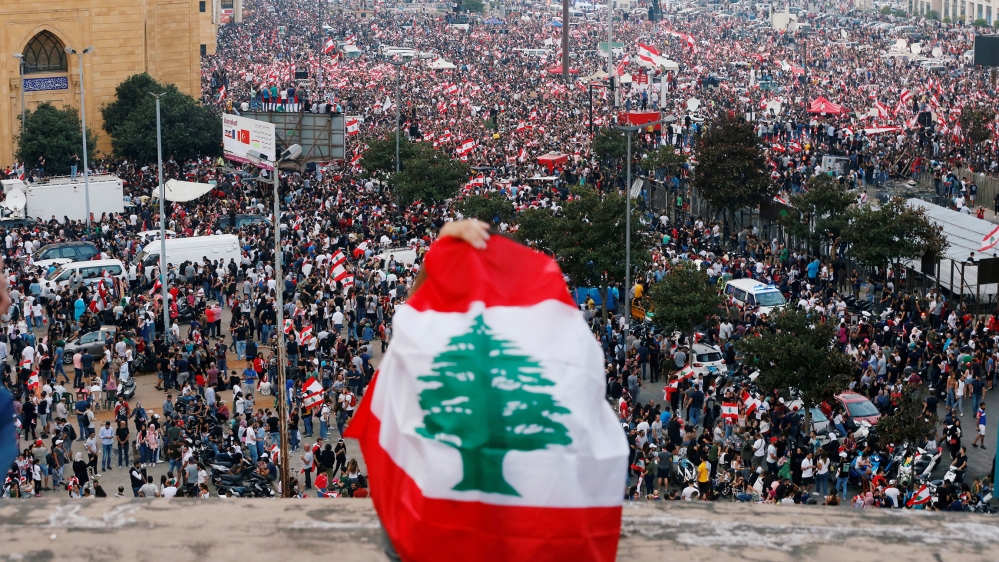 Diab’s nomination was greeted with more protests, as demonstrators who want a government of independent experts to steer the country out of an economic crises, criticised Diab for being nominated by Hezbollah and its allies.

In November, against a backdrop of a weakening economy, Iranians took to the streets in response to the government’s decision to suddenly increase fuel prices by 50 percent.

According to officials, some 200,000 people took part in the protests, with rights organisation Amnesty International later saying that at least 208 protesters were killed in the subsequent government crackdown. 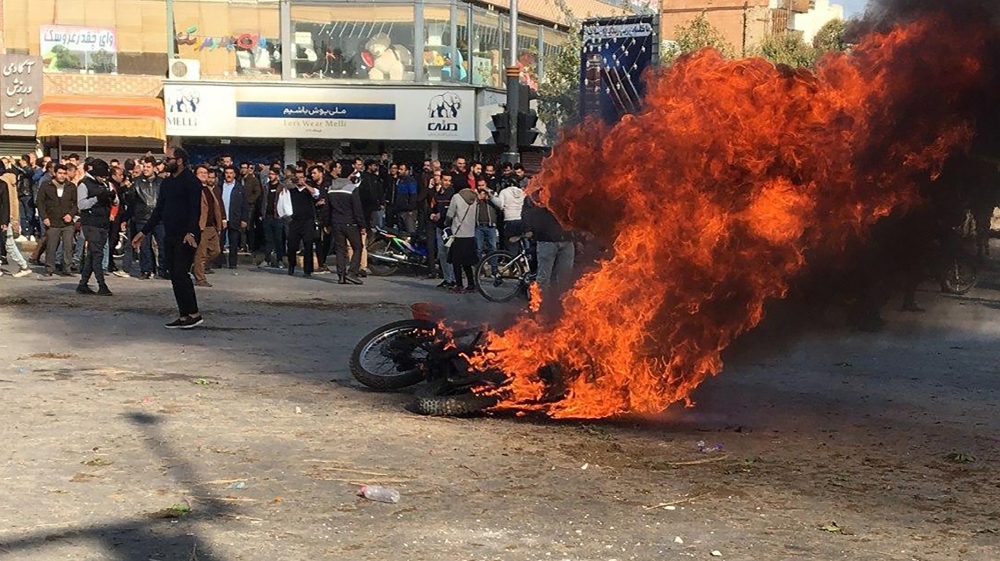 In April, Israelis headed to the polls for legislative elections, but neither Prime Minister Benjamin Netanyahu nor his main rival Benny Gantz were able to form a government, leading to a second election in September.

The results once again proved inconclusive, as the top two political parties – Netanyahu’s Likud and Gantz’s Blue and White – failed to secure a majority or build a coalition government. The outcome means Israelis will vote in an unprecedented third election in less than a year on March 2.

In Tunisia, Kais Saied, a 61-year-old constitutional law professor who ran a minimalist campaign and promised to fight corruption, won the presidential election in a landslide, taking 72.71 percent of the votes. 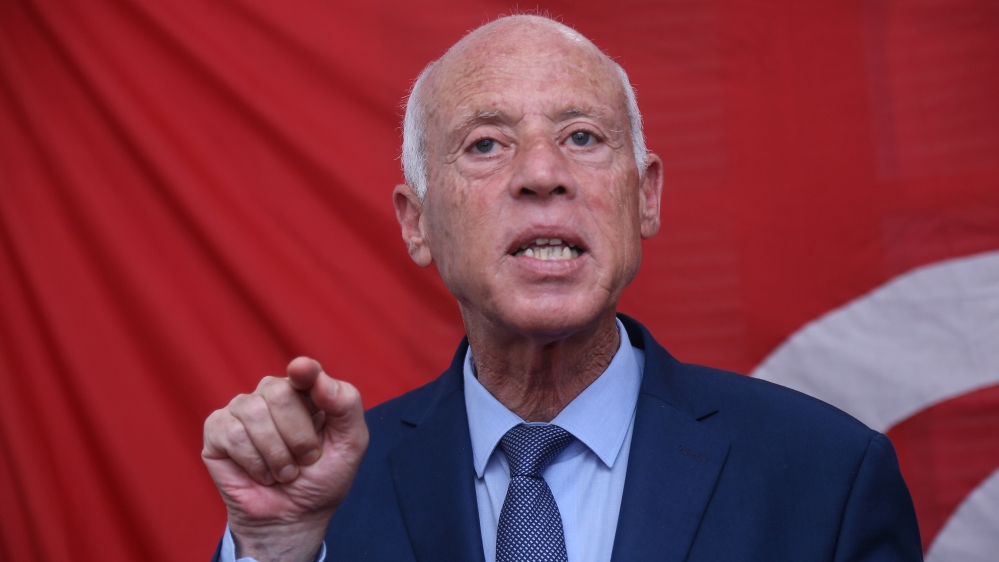 Algeria saw a more contentious election in December, when tens of thousands of protesters boycotted the event, demanding deeper reforms ahead of any vote.

Abdelmadjid Tebboune, a former prime minister, was elected as president, but protesters have vowed to continue their weekly Friday rallies until root-and-branch political reform is enacted.

On April 30, Syrian government forces – aided by Russian fighter jets – launched an offensive to re-take the “Greater Idlib” region, which is home to three million people, some of whom were already internally displaced.

The objective of President Bashar al-Assad‘s forces was to seize the strategic M5 highway and to expel Hay’et Tahrir al-Sham (HTS), a former al-Qaeda affiliate, from Syria’s last rebel-held enclave.

The United Nations estimated that about 400,000 people were displaced in the region during an escalation of attacks between April and August. Multiple ceasefires since then have collapsed and a new wave of attacks in December displaced at least a further 235,000, according to the UN. 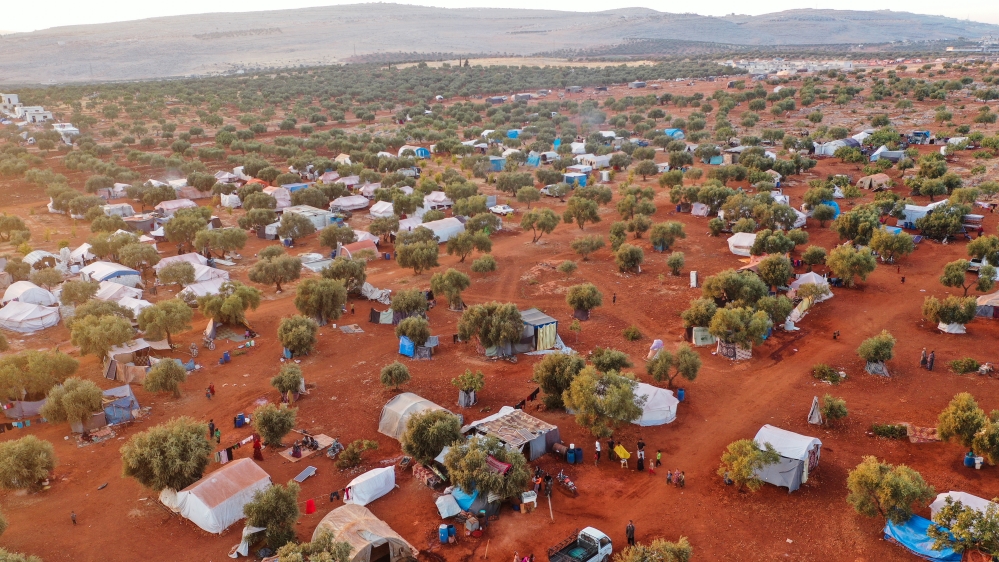 Hundreds of thousands of people have been displaced in Idlib in 2019, according to the UN (File: Burak Kara/Getty Images]

Following US President Donald Trump‘s surprise announcement that the US would withdraw troops from northeast Syria, Turkey launched a ground offensive into the area in October.

Turkish President Recep Tayyip Erdogan said the objective of the military offensive was to drive the Kurdish-led Syrian Democratic Forces (SDF) away from the border region. Turkey considers the group to be “terrorists” due to its links with the Kurdistan Workers’ Party (PKK), which is outlawed in Turkey. 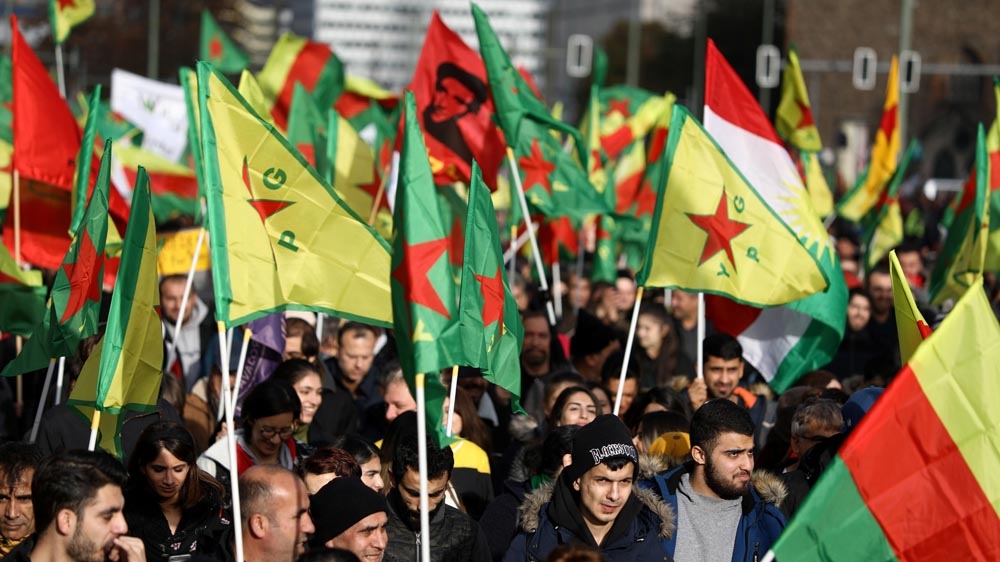 Kurds and allies around the world took to the streets to protest Turkey’s offensive [File: Christian Mang/Reuters]

Erdogan said Turkey also wanted to create a so-called “safe zone” stretching some 30km (20 miles) into Syria, in which some of the 3.6 million refugees currently living in Turkey could be resettled.

The operation culminated in an agreement reached between Turkey and Russia – who back opposing sides in Syria’s civil war – on October 22.

Ankara and Moscow agreed on a deal for Kurdish fighters to withdraw from the safe zone within 150 hours, as well as joint military patrols east and west of the area.

5. The ‘deal of the century’ workshop

In June, the Bahraini capital, Manama, hosted the unveiling of the first part of the United States‘s long-awaited Israel-Palestine peace plan, the so-called “deal of the century“. Introduced under the name “Peace to Prosperity”, the economic component of the plan was presented by White House senior adviser Jared Kushner. 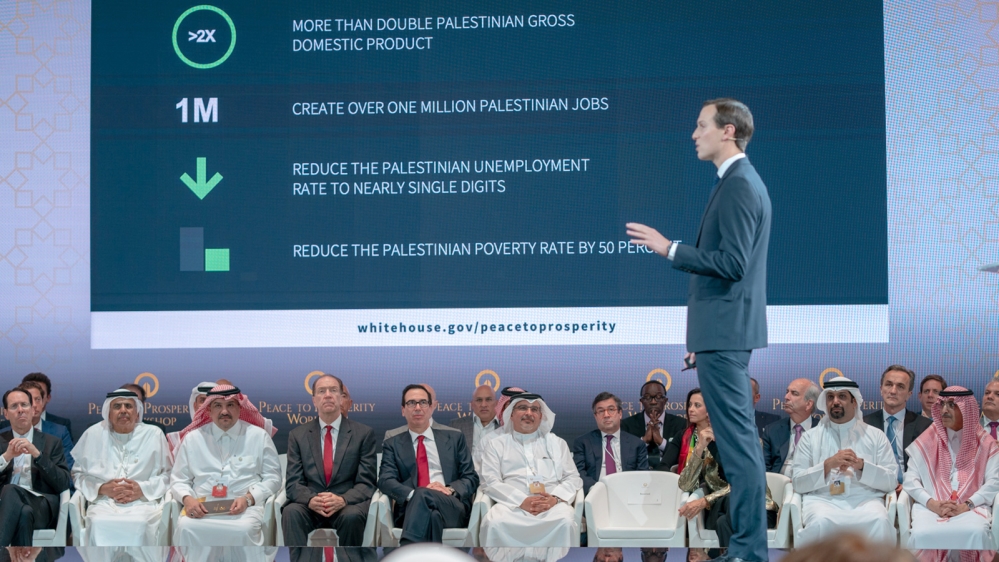 Some Arab states sent low-level delegations to the event, which was boycotted by the Palestinians [File: Anadolu Agency]

The US plan included the creation of a $50bn global investment fund that over the course of 10 years would finance 179 investment and business projects in the occupied Palestinian territories and surrounding Arab countries.

Some Arab states sent low-level delegations, while a number of Israeli businessmen attended, but the event was boycotted by the Palestinian Authority (PA), which rejected the plan outright for for failing to address the Israeli occupation of Palestinian territories.

“The real problem is the political one,” said PA President Mahmoud Abbas.

The workshop was just one of a series of US moves that have significantly damaged relations with the Palestinians. In March, the US closed its Jerusalem Consulate, which had served as a direct link between the two sides for decades while in November, Washington said it no longer considers Israeli settlements in the occupied West Bank and East Jerusalem illegal.

In May, the UAE said that four commercial ships were “sabotaged” off the coast of Fujairah. The following month two tankers were attacked in the Gulf of Oman. The US blamed Tehran for the June incident and “recent similar Iranian attacks on shipping”. The allegation was “categorically” rejected by Iran.

The incidents raised fears about the viability of the key Strait of Hormuz shipping route, which lies between Iran and Oman, and connects the Gulf with the Gulf of Oman and the Arabian Sea.

On July 4, the Iranian oil tanker Grace 1 was seized by the British Royal Marines off the coast of Gibraltar on suspicion of violating European Union sanctions on Syria. 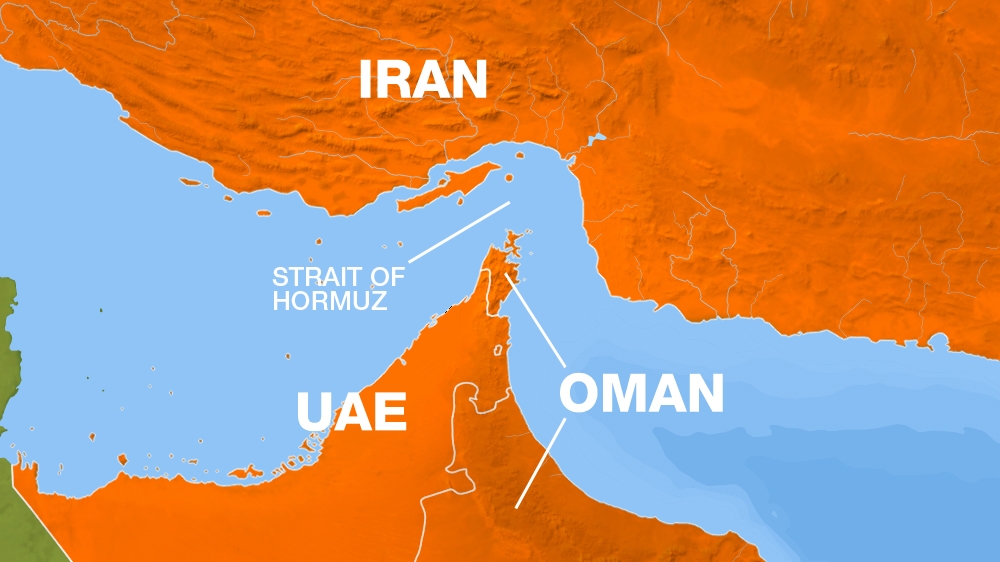 In September, drone attacks hit two of Saudi petroleum and natural gas giant Aramco’s oil processing facilities in the east of the country.

Yemen’s Houthi rebel group claimed responsibility but Riyadh – along with the US – has blamed Iran for the attacks. Iran denies involvement.

The pre-dawn attacks knocked out more than half of the top global exporter’s output – five percent of the global oil supply – or about 5.7 million barrels per day. 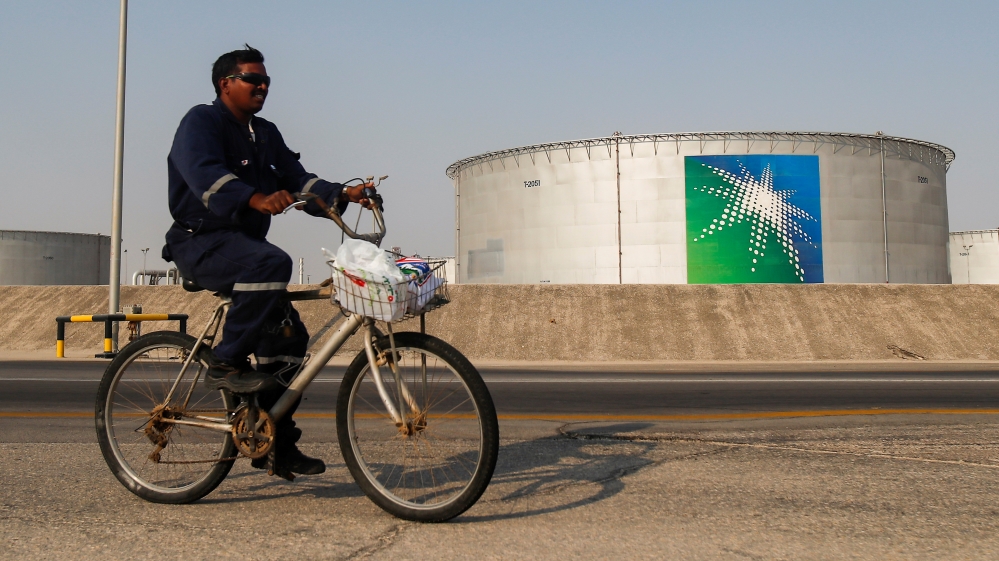 Aramco hit the headlines in 2019 for after a surprise attack knocked out half of its oil production [File: Maxim Shemetov/Reuters]

Benjamin Netanyahu was indicted for bribery, breach of trust and fraud in three corruption cases in late November. The cases centre around allegations of wrongfully receiving gifts, including champagne and cigars, from a film producer and a businessman, as well as allegations of manipulating the media.

The Israeli prime minister denies any wrongdoing and claimed he is the victim of an “attempted coup” and a “witch hunt”. Despite the criminal charges being filed, Israeli law does not require him to step down from the post of prime minister, and the veteran prime minister intends to lead the right-wing Likud party into the next election. 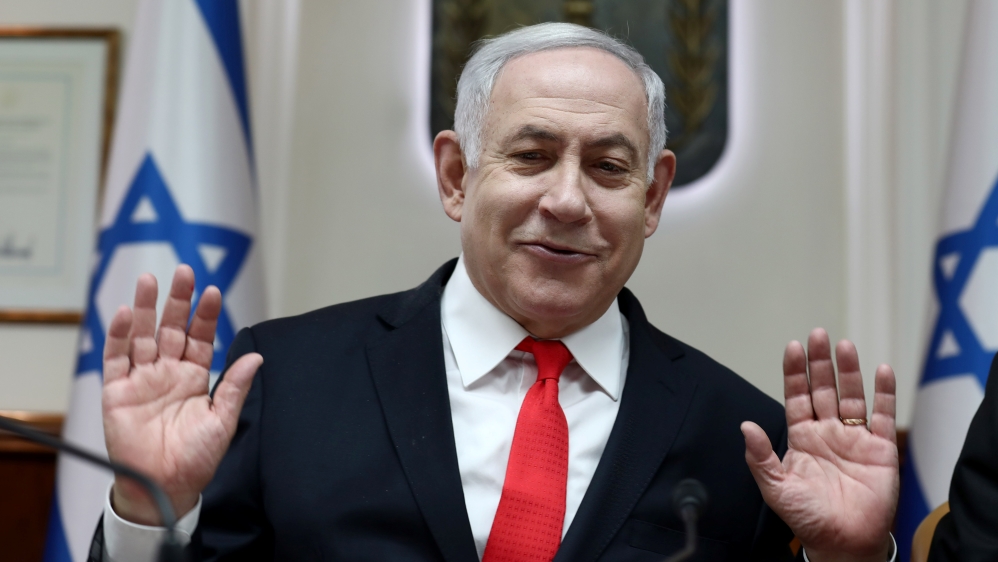 Sudan’s al-Bashir was sentenced to two years in a state-run reform centre over financial irregularity and corruption charges on December 14. The case against the 75-year-old centred around suitcases filled with multiple currencies worth more than $130m which were found in his home and was the first of several cases against him.

Later in December, Saudi Arabia sentenced five people to death over the murder of journalist Jamal Khashoggi, who was killed and dismembered in the Saudi consulate in Istanbul in October 2018.

However, two top figures who were investigated over the killing – former royal adviser Saud al-Qahtani and deputy intelligence chief Ahmed al-Assiri – were exonerated in the secret trial, which rights experts said failed to meet international due process standards.

July saw the death of Tunisia’s first democratically-elected President Beji Caid Essebsi at the age of 92. He was a polarising figure in the North African country. Supporters praise his successful management of the transition to democracy, but critics say he also undermined the democratic process.

In October, the leader of the Islamic State of Iraq and the Levant (also known as ISIL or ISIS) Abu Bakr al-Baghdadi died during a US military operation in Syria’s Idlib province.

Trump said al-Baghdadi detonated an explosive vest, killing himself and three of his children. His death was the latest setback for ISIL, following the loss in 2018 of the last of the territory it held in Syria 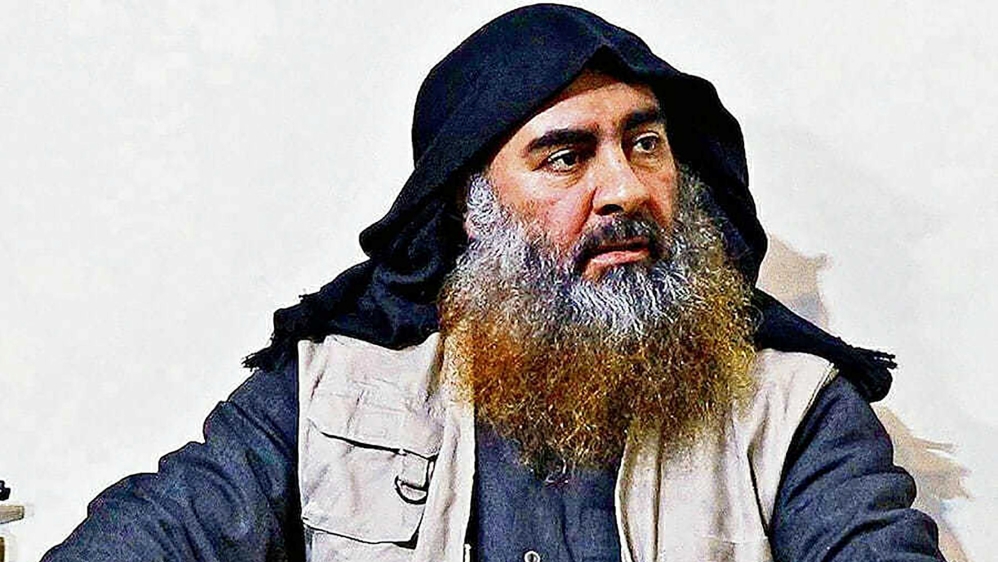 Al-Baghdadi died during a US military operation in Syria’s Idlib province [File: US Department of Defense/Handout via Reuters]

Algeria’s powerful military chief Ahmed Gaid Salah, who emerged as the country’s de facto leader after Bouteflika was removed, was credited with deciding to hold back the army from interfering with the protest movement but criticised for pushing ahead with presidential elections, died in December at the age of 79.

10. Political football in the Gulf

On February 1, Qatar‘s national football team won its maiden Asian Cup with a 3-1 victory over four-time champions Japan. The event was hosted by the United Arab Emirates, one of four countries that have enforced a land, sea and air blockade on Qatar since 2017. Qatar beat the UAE in the semi-final by a resounding four goals to nil, leading unimpressed Emirati supporters to throw bottles and shoes onto the pitch. 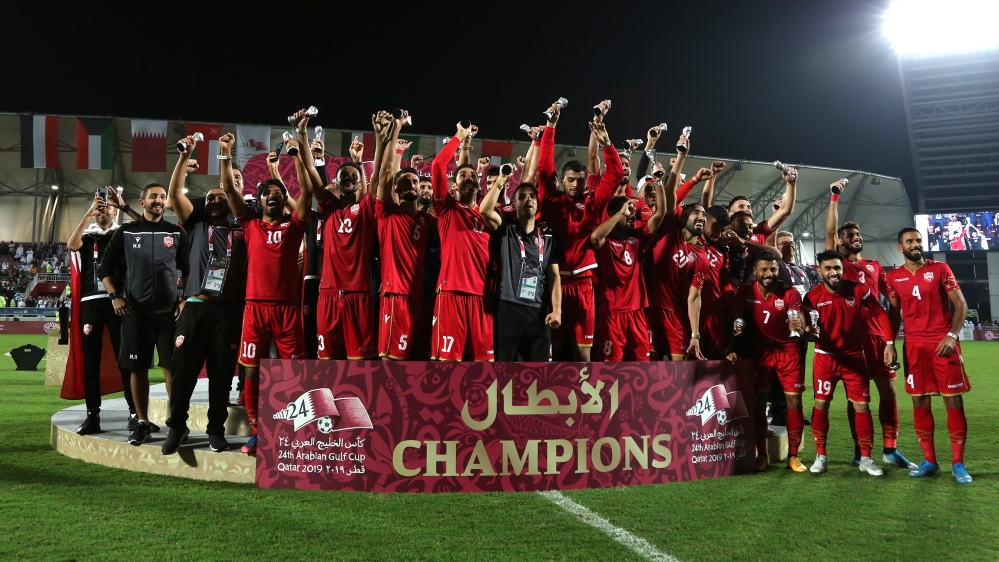 Fast forward nine months to another football tournament, this time hosted by Qatar. The 24th Arabian Gulf Cup saw the participation of three of the blockading nations – Saudi Arabia, the UAE and eventual winners Bahrain – who at the last minute reversed an earlier decision to boycott the event.

My Top 25 African Business Innovations For 2019

'A crisis of hate': Politicians condemn anti-Semitism after Hannukah attack