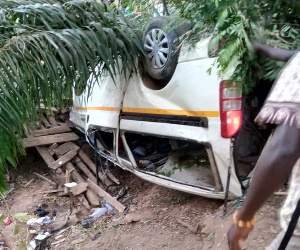 Six Ghanaian traders died on the spot after a truck on which they were travelling got involved in a fatal crash in Burkina Faso on New Year’s Day 2020 at about 5 p.m.

The truck, which was loaded with tomatoes and headed for the Makola market in Accra, burst a front tyre near the southern Burkinabe city of Po.

It somersaulted several times and killed six of the occupants on the spot.

Nine others, who sustained various degrees of injuries, were admitted at the War Memorial Hospital in Navrongo in the Upper East Region for medical care while the deceased have been deposited at the hospital’s morgue.

A health official at the hospital who confirmed the accident and spoke to Class News on condition of anonymity said: “Every year in Navrongo, we receive cases like this. These Ghanaian traders normally go to Burkina to buy tomatoes and on this occasion, they went and bought the tomatoes; when they were coming, I don’t really know exactly the spot but on their way to Ghana in a big truck, they had the front tyre burst and the car veered off the road and somersaulted several times…

“Two males and four females died on the spot and they are all from Accra. The other traders are all speaking Ga and I’ve received some more [patients]…those who are supposed to be resuscitated are being [resuscitated].”