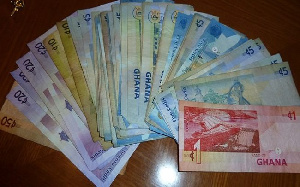 The local Ghanaian currency ended the year 2019 with a depreciation rate of about 12.9% to the US dollar, based on data from the Bank of Ghana’s website.

The cedi experienced some sharp decline in value early last year (February 2019) after some foreign investors liquidated their investments in government bonds. But the situation was brought under control after the issuance of the US$3 billion Eurobond in March 2019 and subsequent US$1.5 billion Cocobod syndication in August 2019 that brought some billions of dollar inflows into the Ghanaian economy.

However, it assumed some depreciation again in November but was cut short early in December 2019.

Prior to the alarming decline of the cedi in February 2019, some research outfits had projected quite favourable depreciation to the American green buck. Standard Bank, the parent company of Stanbic Bank, projected about GHS5.40 to a dollar in 31 December 2019 while Fitch had forecast GHS5.34 end-year cedi rate to the US dollar.

Economists are hoping that the perennial sharp depreciation of the cedi will not be experienced much this year.

This is due to the BoG policy of selling dollars via the FX forward auction.

“The decision to auction relatively higher volumes in Q1 is a potential mitigation for seasonal depreciation pressures that emerge at that time of the year”, he emphasised.

The Bank of Ghana will auction US$715 million in Forward Foreign Exchange Auctions in the whole of 2020.

The months with the expected highest auctions of US$80 million each are January, February and March 2020 (quarter one).

The move to auction such an amount of US dollars is seen by many to help arrest, to some extent, the perennial depreciation of the cedi in a crucial election year in which the performance of the cedi will be used as a key campaign message by any of the key political parties.

The year 2020 will be a successful one - Pastor

The year 2020 will be a successful one - Pastor