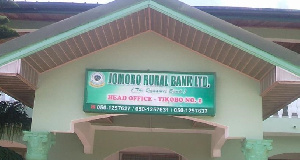 The Bank was able to reach the threshold since the Board members made it compulsory for all Directors, Management and Staff to purchase some fixed amount of shares every month.

As part of a strategy, the Bank has also proposed that the minimum number of shares for aspiring Directors be pegged at GHc10, 000 with those of their nominators and seconders being GHc4, 000.

Chairman of the Board of Directors, Professor Cosmos Cobbold announced this when he delivering an annual report and financial statements of the year ended 31st December 2018 during the 22nd Annual General Meeting (AGM) of shareholders of the Bank at Tikobo No.1 in the Western Region.

Prof. Cobbold said the Bank recorded moderate growth in its key performance indicators with the exception of profit before and after-tax.

The Board recommended that dividends be converted to bonus shares for members and urged shareholders to take keen interests in their investments by going to any of their branches to update their records and take statements.

Prof. Cobbold encouraged existing and potential customers to continue to do business with the Bank and dispel the rumours that Bank of Ghana was going to close down rural Banks adding that the Bank of Ghana and ARB Apex Bank are poised to reposition the rural and community banking sector to enable them better support rural economic development.

He was highly elated to announce that the Jomoro Rural Bank Ltd. was among the Banks that were given a clean bill of health to sign on to the Ghana Deposit Protection Scheme to protect depositor’s interest in the event of Bank failure.

On corporate social responsibility, the Bank afforded students from various tertiary institutions in the country, the opportunity to undertake their internship and spent a total amount of GHc6, 197.00 in the areas of education, health, sports and culture.

Prof.Cobbold said the Board of Directors remained resolute in its commitment to staff development adding that a number of staff members were given the opportunity to pursue approved programmes in various tertiary institutions in the country and also participated fully in internal training programmes as well as training programmes organized by the Association of Rural Banks, the ARB Apex Banka and the Bank of Ghana during the year under review.

Prof.Cobbold said the developments in the micro-finance and savings and loans sub-sector impacted the operations of RCBs in 2019 and has brought to the fore, the need for prudent management of risk and liquidity.

He said the Board and management of the Jomoro Rural Bank will work collaboratively with the Bank of Ghana, the ARB Apex Bank and auditors of the Bank to ensure that the Bank remains robust and resilient at all times.

The General Manager of the Bank, Mr.Adormah Mawunyo said the Bank said the Bank was poised to make more profit in the ensuing years to be counted as one of the best financial institutions in the country.

Books 2020: What you could be reading