Are What We Eat Strengthening Or Killing Us?

“Why are there cockroaches moving all over the pizza tray?”

“Why do people still patronise this restaurant?”

These are a few of the numerous questions that kept running through my mind as I sat in the restaurant.

A few months ago, a friend of mine invited me on a hang out to one of the most patronized pizzerias in Ghana. Though I would have preferred a different restaurant, he insisted on going to that place because its location was quite convenient for both of us.

We talked for long, catching up on old times when the long-awaited moment arrived. Being a food lover, I was quite excited to taste the sumptuous looking pizza until the most unfortunate thing happened! Running all over the pizza tray, especially from the little space beneath the tray were baby cockroaches, with some even running on the food.

Confused, I asked my friend whether we were both seeing the same thing and whether he would still eat the pizza. In the affirmative, he replied in Twi, with the literal meaning of “this is not what killed Kwame Nkrumah”.

Uncomfortably, I munched on the pizza, going through every second with the notion of “why pretend? I’ve probably eaten worse somewhere else”.

That, however, didn’t stop me from wondering where the mothers of the baby roaches were and how dangerous it was to have them in the restaurant’s kitchen, how unclean their kitchen might be, what goes on in the restaurants and chop bars which are not even kept as clean as this pizzeria looked, and what our raw foods even go through before they are processed into meals.

I left the pizzeria with my thoughts everywhere, asking many questions at the same time.

In Ghana, the lifestyle of preparing meals at home is usually perceived as a preserve for some people and not everyone. It is thus common for most people to find something to buy on the streets; from a local eatery joint or a restaurant – and there are many reasons such as time constraints or busy schedules for this option.

Some Ghanaians even have a funny theory that ‘waakye’ tastes better when it is sold by gutters, an assertion that even some literate people make quite seriously.

But how safe are the foods sold outside the home, be it on the street, close to a gutter, at a restaurant, or even in the market?

Food safety hazards have been a major issue for many Ghanaians for several years now. The concerns are numerous; from the chemical hazards, where people worry about the presence of chemicals in food produce to unhygienic cooking and selling venues.

According to the Ministry of Food and Agriculture, one in every forty Ghanaians experiences serious foodborne diseases annually.

The Ministry of Health has shown that the total number of outpatients reported cases of foodborne diseases in Ghana is about 420,000 per year, with an annual death rate estimated at 65,000, and total cost to the economy at US$69 million.

Unsafe food is a key contributor to common food-borne diseases that affect Ghanaians such as typhoid fever, dysentery and cholera.

According to the World Health Organization (WHO), it is estimated that 1.4 to 4.3 million cholera cases are recorded around the world annually, with 28,000 to 142,000 cholera deaths occurring globally each year.

With the alarming figures from cholera alone, it stands to reason that buyers and consumers alike would be concerned about the health risks of eating unwholesome food.

In a recent video that went viral on social media, a beef seller in an unnamed market was seen drenching her meat with mosquito spray, with the intention of killing the houseflies that had surrounded the meat.

The effort by the young man who was taking the video to stop her from continuing with the act fell on deaf ears.

Other videos and stories have come up, with some companies producing plastic foods that they pose as fresh foods such as rice, fish, and egg. The sale of rotten foods

I spoke to some sellers at the Agbogbloshie Market in Accra about what goes into how the raw foods are handled at the markets.

Though there were conflicting views as to whether raw foods are preserved or discarded when they go bad, it was admitted that some vegetables are still sold to particular customers, chop bar operators especially, even in their rotten state.

“The rotten tomatoes are still consumed. For instance, if I bring in tomatoes worth GH₵600.00, with about half the quantity being rotten, there will certainly be good ones in there. After selling the good ones, I can’t dispose of the rotten ones. So I sell the rotten ones to chop bars, restaurant operators, and others. We are the same people who patronize foods from restaurants and chop bars and consume,” Paulina Faakor, a tomatoes seller disclosed. 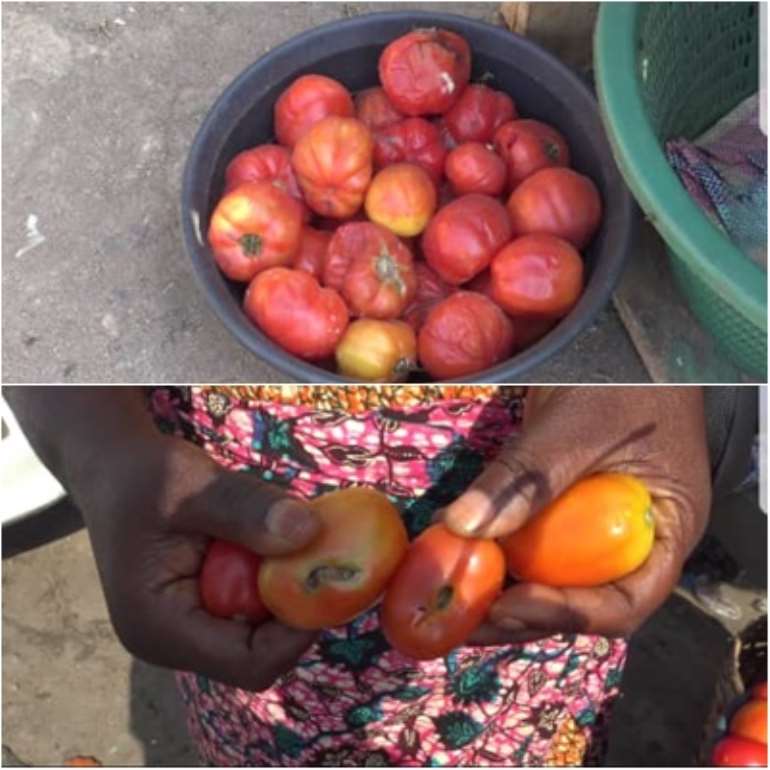 A cabbage seller who chose to remain anonymous also said vegetables are given away to herdsmen to serve as food for the animals, though sometimes they are sold to particular customers at cheaper prices.

“We can’t preserve them [the vegetables]. We don’t have warehouses to preserve them. So if by the end of the day, you have products you couldn’t sell, you put it in your sack so that you can sell it the next day. Some will definitely rot in it. We give those ones to the cattle rearers so that it will not pile up to be rubbish over here,” he said.

When asked whether they sell the bad ones to some people, he replied by saying “it is a fact”.

“I’m selling to get my money. Sometimes, when they are going bad, I put them on the ground. When a customer comes and asks for it, I give it to them more to go and cut it and use for their food,” he added. 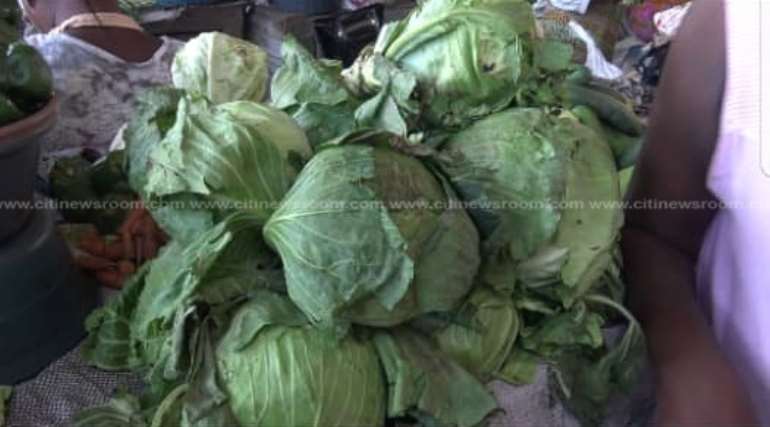 Despite the houseflies that kept standing on and hovering around the famous salted fish locally known as “momoni”, its seller clearly noted that once the remaining fish was always salted after every day’s sales, it could last for a whole year without going bad. This was the only form of preservation for the momoni.

Consumers still purchase it anyway despite the flies and insects on it, ignoring the fact that flies carry their own trouble. 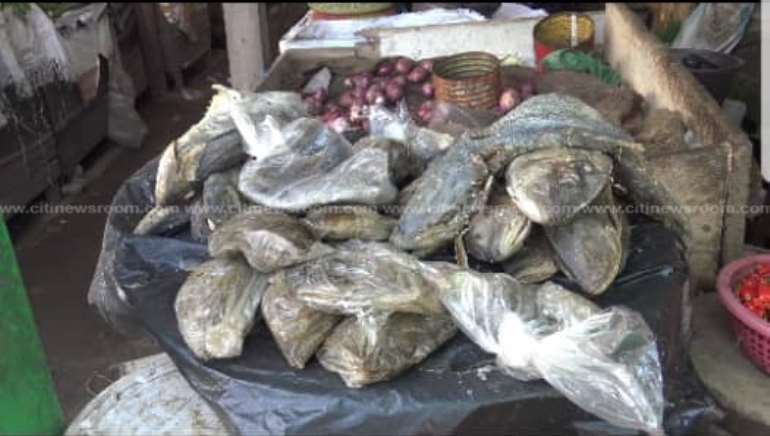 The Accra Metropolitan Assembly (AMA) under whose jurisdiction the Agbogbloshie Market falls, has on several occasions warned the public against patronizing foods which are displayed in unhealthy environments. 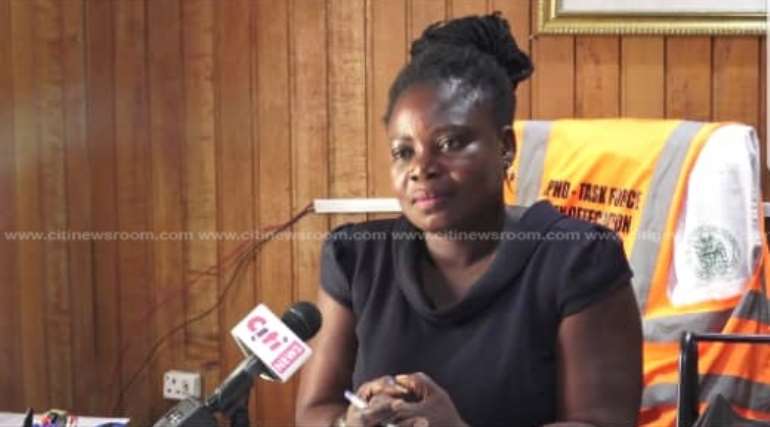 The Head of the Public Health Department of the AMA, Florence Kuukyi, says although they are constantly doing their possible best in the fight against these unhealthy practices in the market, they have limitations.

“We are trying to break the chain of the sale of rotten vegetables and to break the chain, we trace it to the mill. Because every chop bar sends their vegetables to the mill to go and blend. When you go to the markets, they have the mills there and we have officers there as well so when you come there and you have rotten tomatoes and others with you, we take it from you and we send you to court,” she stated.

“The challenges may be that for example, I’ve gone to serve a market woman a summons to go to court, the person will stop coming to that spot. Then later you’ll go and see the woman at a different place. This makes it difficult to monitor. So lack of staff creates another problem. But whether low staffing or not, with the little that we have, we are trying our best to see to it that work goes on,” Madam Kuukyi said.

The Plant Pool Co-operative Vegetable Farmers’ Association is involved in growing and selling various vegetable crops and herbs such as cabbage, spinach, mint and cucumber. 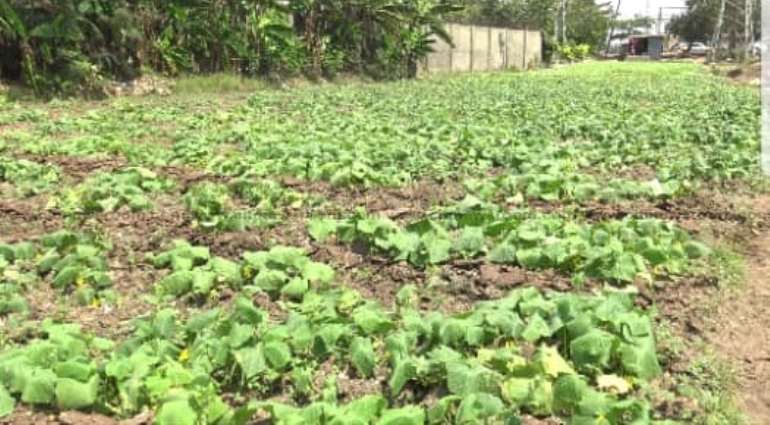 Public health professionals have had cause to complain about the water such farmers use in irrigating their crops.

The Secretary for the Association Selassie Agbey noted that “one of our problems is about water. Because there is a stream over here which most people say is a gutter. To me, it’s not a gutter, but a stream. In Ghana, our pipe-borne water does not flow every single time. There are times where the pipe water does not even flow at all. Since the sun is also up, we also need water to water our crops because we cannot leave them to die.”

According to him, they process water from the nearby stream before usage, to prevent any germs or infections on the crops.

“So what we do is we pump water from the stream into our dugouts. Formerly, we used to pump the water straight onto the crops on the field but an agency came and had a talk with us and taught us about how to even manage the stream on the field,” he said. 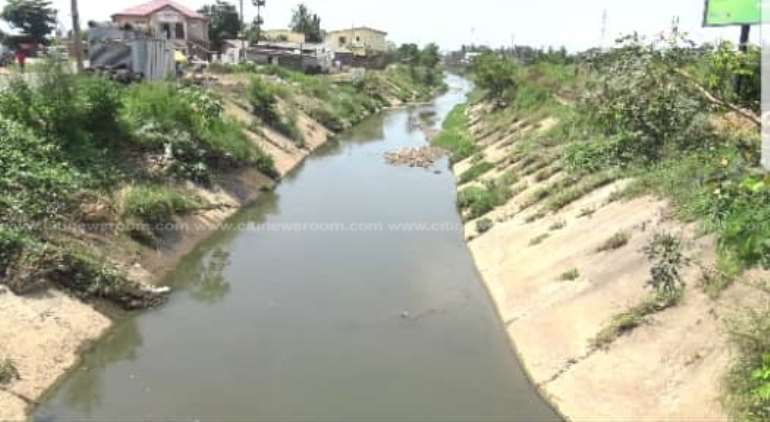 The stream from which the farmers pump their water 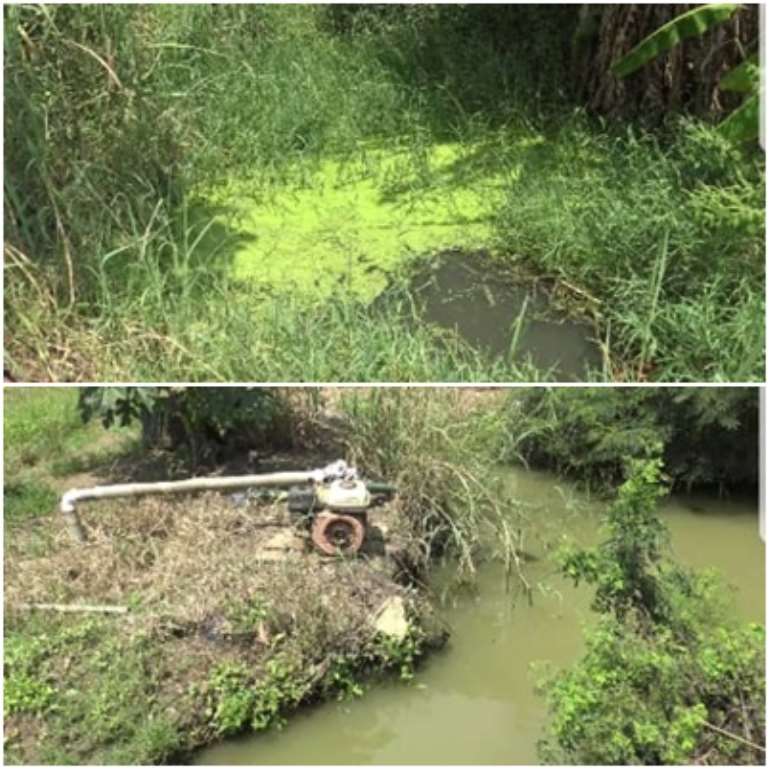 The Food and Drugs Authority, the body responsible for the regulation of all foods, medicines, food supplements, cosmetic and many others, says the sale and purchase of stale foods is criminal.

Roderick Daddey-Adjei, the Head of Food Market Surveillance Department of the FDA shares the processes the products go through before going into the markets.

“It’s expected that the Ministry for Food and Agriculture would ensure that the farmers use the right practices, pesticides and fertilizers on the products. If they do all of these things within everybody’s domain, then FDA can also now come in and the product is transported to the market. When it gets to the market, the Environmental Health Officer would ensure that before it gets into the market there’s some basic inspection that is done so that the squashed ones are not sent there.”

“So the products go through different processes and somebody must be there to ensure that the right thing is being done. Otherwise, the market women and men are always thinking about their profit. Also, when people also go and buy, they should go for the best.” 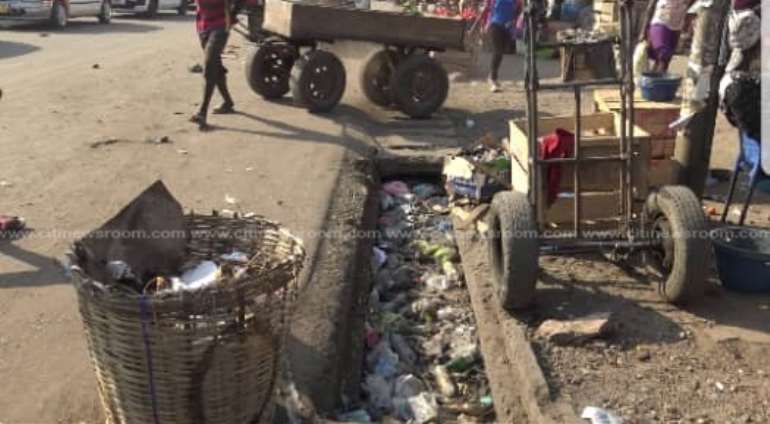 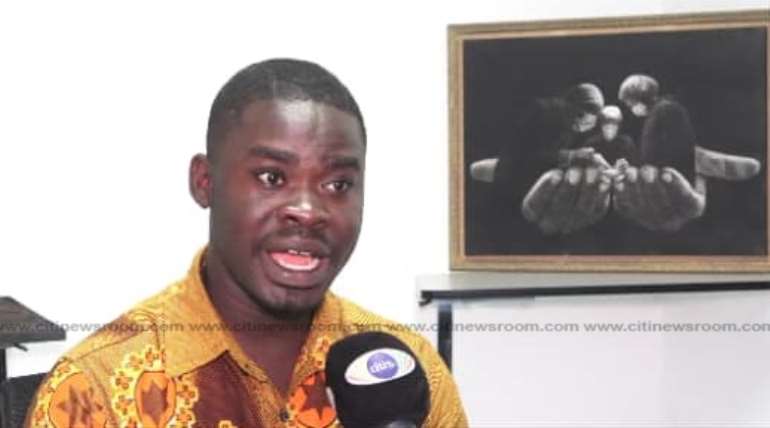 In order to have a clear understanding of how dangerous it is to eat foods which are not grown or prepared in healthy conditions, I sought the views of Benson Owusu, a Public Health Specialist at the Ridge Hospital.

“Eating bad foods can predispose you to these diarrhoea diseases such as cholera, typhoid fever which is now very common among us, and others. When it comes to the animals, some of them use lorry tyres in burning the hair off the animal. So they put the animal on the burning tyre to do that. This contains chemicals and metals. These chemicals can go into the system of the butchered animal.”

I find myself always being chastised by my mum to stop buying food from restaurants and always cook from home. That is the same advice I would leave with you.

From all indications, we are all at high risk of exposure to illnesses following the state of the foods we consume. However, to avoid such unfortunate situations, always check the environment from which foods are purchased, whether raw or cooked and try as much as possible to cook your own foods.

Law and Council won't prevent Ghana from overspending in 2020 – Economist

Law and Council won't prevent Ghana from overspending in 2020 – Economist

Intro to Mobile Money in Ghana for Business Owners

The “Classics” Of The Veep