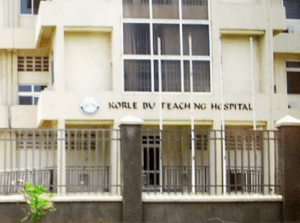 Four departments at the Korle-bu Teaching Hospital will save GH¢2.1 million of electricity annually after replacing all the high energy consumption appliances.

The current energy expenditure of these departments-Child Health, Medical Block, Accident and Emergency Unit and Central Laboratory is GH¢3.4 million, translating into 2.8 million kilowatt/hour per year.

To help cut down the electricity bill, the Millennium Development Authority (MIDA) is retrofitting the departments with efficient energy appliances such as refrigerators, air-conditioners, fans and lightning system, which are four star-rated.

The project, known as the Energy Efficiency and Demand Side Management (EEDSM) of the “RACE to RETROFIT,” is estimated to cost $3,000,000.

It comes under the Ghana Power Compact II, and would be completed in March, this year.

The RACE to RETROFIT project is intended to replace high energy consumption electrical appliances at public institutions with energy efficient ones, and is funded by the United States Government, through the Millennium Challenge Corporation (MCC).

Maybert/Wester Engineering are the Contractors undertaking the job at the Korle-Bu Teaching Hospital and five other public institutions- University of Ghana, Adabraka Polyclinic, Department of Urban Roads, Ministries of Education and Health.

During a field tour of the departments at Korle-bu, Mr Richmond Owusu, the Project Manager, EEDSM, Energy Commission Office, said they undertook an audit of the four departments, to ascertain how much electricity was being consumed so that after the retrofitting, they would have fair understanding of the quantum of energy saved.

He said the contractors would install real energy monitoring systems at all the beneficiary institutions to check power consumption, saying that, the project would serve as a base model for replicating it in both public and private institutions.

Mrs Faustina Afriyie, the Consultant for the project, said a study conducted at the Korle-bu Hospital before the retrofitting revealed that air-conditioners consumed 50 per cent of power, lightning system-23 per cent, refrigerators- three per cent and other equipment used at the facility constituted 16 per cent.

Madam Esther Tetteh, Administrator for the Child Health Department, said most of the existing electrical appliances were obsolete with high cost for maintenance for the facility.

She said the retrofitting brought uniformity in the electrical gadgets and brought down the cost of maintenance and reduced energy consumption.

“The fans that used to blow hot air are now blowing fresh air and there is a total overhaul of the air-conditioners, fans and the lightning system at the facility, which is bringing us enormous benefit and relief and we’re very grateful to MiDA for the initiative,” Madam Tetteh said.

Ms Priscilla Adjei-Darko, Project Engineer, Energy Efficiency and Demand Side Management at MiDA, said the project sought to change the behaviour and attitudes of energy users at the various public institutions.

Mr Fred Sarpong, the Project Manager of Maybert/Wester Engineering, the Contractor undertaking the retrofitting at Korle-bu Hospital and the five public institutions, said the appliances were four star-rated, low electricity consumption and environmentally-friendly and believed it would reduce the cost of electricity in those beneficiary institutions.

How Mike Bloomberg used his money to shape California politics

Virαl:Chief in Akyem stʊns Ghana with his amazing worship singing to praise God