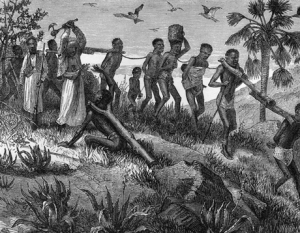 A new research has found that businesses in Africa are still feeling the impact of the Trans-Atlantic Slave Trade. Arguments have been made on the impacts of the Slave Trade on Africa’s overall economy.

The new research yet to be published; and co-authored by Lamar Pierce of the Washington University in St. Louis’ Olin Business School and Jason A. Snyder of the University of Utah titled “Historical Origins of Firm Ownership Structure: The Persistent Effects of the African Slave Trade,” found that the effects of the Trade, which some scholars have argued is not trade at all, persist today among businesses in parts of the continent, with companies more often tightly controlled by individuals or families — often because they have limited access to equity funding and shared ownership.

While closely held ownership isn’t necessarily bad, the study suggests that some African firms may miss 21st century growth opportunities without the ability to raise capital through shared ownership.

“The slave trade appears to predict ownership structure in ways that nothing else can explain,” said Lamar Pierce, who is a professor of organization and strategy at Olin School.

“We argue that institutions and social capital are not simply predictors of ownership structure, but also can be historically persistent mechanisms through which past traumatic shocks to society shape modern businesses. Using data from over 30,000 firms across 41 sub-Saharan countries, we show that firms in areas that suffered high historical slave extraction are today more likely to have concentrated ownership,” the authors say.

According to the authors, “high slave export countries have more sole proprietorships and majority ownership, with our model implying a difference of 43 percentage points between the lowest and highest export countries. This difference is particularly pronounced in the manufacturing sector where high capital needs can necessitate diffuse ownership when credit markets are weak.

Finally, we present modest evidence that weakened institutions and social capital are among the mechanisms through which the historical slave trade increases modern ownership concentration. Our paper answers recent calls to bring both Africa and history back into management research through our theoretical extension into distinct and quantifiable historical origins of firm structure,” they added.

The research also used World Bank data to show that manufacturing firms — heavily dependent on investment capital through debt or equity — tend to have much more closely held ownership structures in countries heavily affected by slavery, primarily in western and central Africa.

“Although ownership concentration can be very useful, not having the option to diversify ownership is bad,” Pierce said.

According to a release copied to ghanabusinessnews.com, the work builds on the authors’s August 2017 research in The Review of Financial Studies, which showed that businesses in countries heavily affected by the slave trade now have more limited access to forms of financing such as bank loans or lines of credit.

It noted further that the research, in turn, builds on work from other researchers who created a database linking nearly 81,000 slaves to 52 modern African countries. Pierce and Snyder cross-referenced that data with extensive data on firms from the World Bank Enterprise Survey, it added.

The release indicates that Pierce said he and Snyder could not definitively say the slave trade caused the later concentration of corporate ownership. But no other variable they investigated could explain the relationship, including weather, colonialism, natural resources such as gold or oil, access to coastlines or the distance to demand markets.

Copyright ©2019 by Creative Imaginations Publicity
All rights reserved. This article or any portion thereof may not be reproduced or used in any manner whatsoever without the express written permission of the publisher except for the use of brief quotations in reviews.

A NIGERIAN'S OBSERVATIONS ABOUT GHANA WILL SHOCK YOU-ghanatoday.net

Let this year be about your happiness

Let this year be about your happiness

Lisa Nandy tells Labour: be brave and choose me as leader | Politics