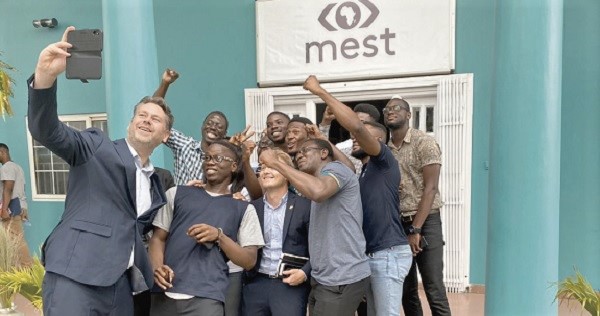 Governments and players in the telecom sector in Ghana and Africa have been urged to come together to discuss pragmatic ways to make the cost of data more affordable for the people.

The Danish Ambassador to the Silicon Valley, Mr Casper Klynge, who made the call in an interview with the Daily Graphic on Christmas eve, said the move was necessary to bridge the digital divide on the continent.

Comparing the cost of data in Ghana and Africa, for that matter, to that of Europe, he said “I think if you look at the numbers in Europe, people on the average use less than one per cent of their income to pay to be online.

In Africa, an average cost to be online starts from eight per cent on their income so it is almost eight times more expensive to come online in Africa than it is in Europe and that is a massive problem because it also creates inequality”.

The call comes at a time when there is growing concern about the cost of data in the country and how it is impacting negatively on sustainable growth as well as helping to widen the digital divide.

Although there has been some pressure being mounted on the telecom companies in the country to further reduce the cost of data for their customers, there is evidence that Ghana remains one of the few countries in West Africa that charges lower rates for mobile internet data.

According to the latest Alliance for Affordable Internet (A4AI) report on mobile broadband pricing data, which focused on 100 low and middle-income countries in the world, it was revealed that the cost of 1-gigabit of broadband internet data in Ghana is US$3.60 compared to US$15.00 in Zimbabwe, the most expensive among the 100 countries captured in the report.

Nigeria maintained its position as having the cheapest internet cost in the sub-region. For instance, 1 gigabit of broadband data in Nigeria increased marginally from about $2.74 (equivalent to GH¢13) in 2018 to $2.78 last year according to the report.

In Ghana, it is clear that the telecom companies are showing some indications about their commitment to reduce the cost of data for the customers but on condition that the government reduces the huge and sometimes, unnecessary taxes imposed on their revenues and equipment imported into the country.

Mr Klynge, who was in Accra to engage with some ministries including the Ministry of Communications and other sector agencies, said: “We already know that women are not as much online as men; data pricing is something that matters here if we are to get that large number of women without data because of affordability and access to get online.

“You realise that you need to lower the price and I think governments have a role to play and the private sector also has a role to play to make sure that investments are made to boost the digital economy on the continent”, he said.

When asked about how Ghana can overcome the threat of cybersecurity, Mr Klynge referred to the meeting he had with the Minister of Communications in Ghana, Mrs Ursula Owusu-Ekuful, and noted that “cyber security was an important topic with the minister and last but not least we also discussed how we can strengthen our collaboration in that regard and in many other areas”.

“It was really a good conversation we had where we agreed that we would explore and strengthen our partnership with the focus on technology”, he said.

Narrowing the issues down to issues around cyber security, he was emphatic when he said that “this cyber security threat is not going to disappear anytime soon so we need to invest more in defending ourselves.”

Mr Klynge also explained further his reason for coming to Ghana saying: “The reason for me being here in Ghana is to have consultations with the government to try and see if we can work closer together focusing on technology and digitalisation and supplementing the already strong bilateral relationship between Denmark and Ghana.”

“I think both in Europe and African we have a major task ahead of us which is to create a better eco system and a better framework for entrepreneurs for startups because the world is becoming very small place”, Mr Klynge said.

He said the US, North America had made it big and China, in the last five to 10 years, had also developed itself to become a technology super power with very big companies like Alibaba and Huawei.

To that end, the tech Ambassador said: “I think the challenge for Africa is how do we make sure we build companies that become globally competitive in all of these areas and I think one of the ways to do this is to look at it from access to capital, connectivity and going back to the point of making sure that everybody is on board”.

On the topic of technology and the Sustainable Development Goals (SDGs), he said: “Without technology we cannot deliver on the sustainable development goals and I think it just shows that technology today is everything.”

It is about fixing climate challenges, it is about positioning agriculture so you can expand the yield that you get from a specific field; it is about health care that becomes cheaper and more affordable; it is about financial services that gives people access to smaller loans”.

“I think the point is, without technology we will not deliver on the sustainable development goals”, Mr Klynge said.