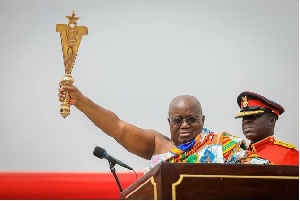 A founder member of the New Patriotic Party (NPP), Dr Kwame Amoako Tuffour, says his party was just lucky to have emerged victorious in the last general elections given the register used.

“We were very luck and I thank God,” he stated.

He maintains that but for the “thorough” and “fast” work done by the party, the results would have gone the other way.

He blamed the situation on the then Chair of the Electoral Commission, Ghana (EC), Charlotte Osei, who insisted on maintaining the register.

Dr Amoako Tuffour expressed these on Saturday, January 18, when he took the hot seat on Hot Issues.

He said claiming power from incumbent parties is not an easy phenomenon in Africa.

Therefore, the NPP, he said, decided to put in its own measures to collate the results in the 2016 elections.

“People were not even worried about the result coming from the regions. We had done thorough, fast work to make sure that we have the figures right,” he said.

“And the figures that were flowing from some other places were not reasonable enough.”

He called into question the posture of the then Chair of the Commission, saying: “I didn’t like the rigidity of the previous Commissioner”.

“She had her way and finally she declared the results and nobody will attack her on that.”

The former director of the School Feeding Programme says the current Chair, Jean Mensa, should also be allowed to do her work.

He lent support to Mrs Mensa, claiming that in every divided situation leadership must be given by the authority in charge.

“If she decided there was not going to be any new voters’ register, the way I know and respect her I must accept it. Now, the same person is saying no, on my study, on my desk, that we must change the register I go with that.”