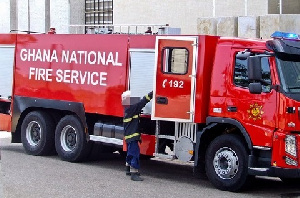 The Upper East Regional Office of the Ghana National Fire Service (GNFS) has appealed to government to construct fire hydrants across vantage points in the Region to make water supply readily available for effective fire control.

Fire hydrant is a component of active fire protection and a connection point by which firefighters can tap into or easily access water supply especially during fire outbreak.

Mr George Asante Wiafe, the Regional Fire Commander, who spoke to the Ghana News Agency in an interview in Bolgatanga on Friday, said lack of fire hydrants at vantage areas particularly in the various districts was adversely affecting the efforts of the personnel during firefighting.

Mr Wiafe, said the Service had only one fire hydrant stationed at the regional office in Bolgatanga, making it difficult for it to supply water to all other areas.

He said most of the districts had to travel from their stations to the regional capital to access water whenever there was fire outbreak and that hindered their efforts to save lives and properties.

He said over the last three years, the region had experienced a decline in fire cases, with 311, 287 and 166 cases in 2017, 2018 and 2019 respectively due to the proactive and intensive education carried out by the officers.

Mr Wiafe urged the Ghana Water Company Limited and the Community Water and Sanitation Agency to consider constructing fire hydrants in the districts, to effectively boost the activities of the Service and save lives and properties.

“This year, we want to engage the Municipal and District Assemblies, the Ghana Water Company Limited and the Community Water and Sanitation Agency to see if they could construct mechanized boreholes as fire hydrants at the various fire stations for the fire fighters to easily access water to fight fires.

“Apart from non-compliance of the members of the public, lack of fire hydrants has been our biggest problem when fighting fire. Our officers even travel from Bongo to Bolgatanga to get water to fight fires,” he added.

Mr Wiafe also appealed to institutions to endeavor to have fire hydrants to help the Fire Service have easy access to sustainable water during fire outbreaks.

The Regional Commander explained that the Service was determined to reduce the incidents of fire in 2020 and called for effective collaboration from all stakeholders, especially the members of the public to prioritize their safety by taking fire safety measures seriously.

Mr Wiafe said apart from the refresher training that would be organized for the personnel and the house to house sensitization approach to be adopted by the Service, his outfit would further engage the chiefs and members of the communities especially fire prone communities, using durbars to drum home fire safety protection and prevention.

He advised Ghanaians to always contact the Fire Service first, if there was any accident instead of the Ghana Police Service because they were trained to rescue people from such circumstance.

The Linguistic Anatomy of a Political Firestorm

The Linguistic Anatomy of a Political Firestorm

Newmont Ghana promises to be fair in compensation payments-Ghanatoday.net