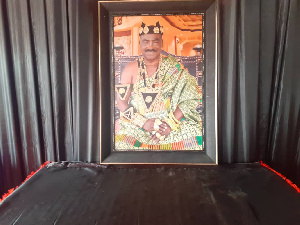 The Gbi Traditional Council in the Volta region have declared a state of mourning for the chiefs and people of Gbi following the death of the Paramount Chief and President of the Gbi traditional Area, Togbega Gabusu VI.

Speaking at the forecourt of the Gbi traditional Council on Saturday,18 January in Hohoe, an event organised to officially announce the sad news to the general public, Togbe Keh XII of Gbi Wegbe announced on behalf of the right hand Chief of Gbi, Togbe Wode IV, the death of the King.

” Togbega Gabusu VI took ill a few months ago. He had quality medical treatment and attention both home and abroad but to no avail, the time has come now for the Gbis to officially inform all and sundry that His Royal Highness Togbega Gabusu VI has gone to the village to join his ancestors” He noted

Togbe Keh issued a directive on what the people of Gbi are expected to do while mourning the departure of their Chief, “all Gbis are expected to observe the next one week starting from today (January 18, 2020) in black or red cloths or uniforms” he indicated.

Meanwhile, a book of condolence has been opened for the general public at the office of the Gbi traditional Council in Hohoe.

The Gbis declared a Divisional Chief of Gbi-Kpeme, Togbe Wode VI as an acting President of the Gbi traditional Council until a new Paramount Chief is enstooled.

The departured Royal Highness ruled over the Gbi Kingdom, one of the largest and powerful traditional area in the Volta region for thirty one years.

All natives of the area are advised to carry on their daily activities in obedience and remain in peaceful environment while mourning.

To the Chagrin of Politicians, New York Has Strict Food Rules

To the Chagrin of Politicians, New York Has Strict Food Rules