We don’t need a ‘cedi rescue’, we need a ‘government rescue’ – Ablakwa: Ghanatoday.net 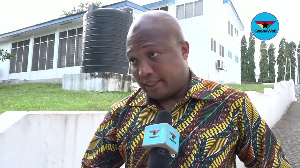 Member of Parliament for North Tongu, Samuel Okudzeto Ablakwa says recent happenings are clear indications that the country needs an entirely different administration to man the government machinery and make the nation work.

His comments come on the back of a recent inauguration of a committee to probe the recurring fall of the cedi as against other currencies, particularly the dollar in recent times.

Government through the Finance Ministry established a Forex Development Committee on Friday, that will look into policy measures and interventions to prevent the recurring depreciation of the cedi from assuming the impact of the central bank.

The move follows a promise made by the Finance Minister, Ken Ofori Atta last year that government would establish a bi-partisan committee to investigate the structural causes of the cedi depreciation and propose adequate measures.

Some sections of Ghanaians however are raising questions about government’s move following the announcement, many suggesting it is only a means for committee members to spend monies from sitting allowances among others.

In a post on Mr. Ablakwa’s twitter page, he said there is a need for a ‘government rescue’ rather than a ‘cedi rescue’.

“It has become as clear as crystal that we do not need a 40-member committee to rescue the Cedi; we need an entirely new Government to rescue the nation.” His post read.

It has become as clear as crystal that we do not need a 40-member committee to rescue the Cedi; we need an entirely new Government to rescue the nation.#JohnMahama2020#RescueMission#MakingGhanaWorkForTheManyNotTheFew