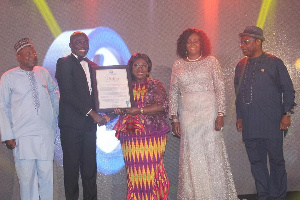 The Ghana Hotels Association (GHA) has honoured President Nana Addo Dankwa Akufo-Addo for demonstrating visionary and exemplary leadership in declaring ‘The Year of Return’ and ensuing its successful execution in 2019.

The Association presented a plaque and a citation christened “Significant Contribution Award” to the President for ensuring that the ‘Year of Return’ initiative impacted significantly on the tourism and hospitality sector and set the stage for accelerated growth of the industry.

The citation read, “For demonstrating strategic foresight in declaring ‘Beyond the Return” to expand and harness the Ghanaian Diaspora dividend for the economic development of the nation in line with the Ghana Beyond Aid policy.

For demonstrating empathetic leadership by promoting domestic tourism for the expansion of the tourism and hospitality market in Ghana”.

The event took place at the 4th GHA awards ceremony in Accra to celebrate deserving hoteliers and personalities who have distinguished themselves in 2019.

The programme was held under the theme: “Reducing Hotel Rates in Ghana: Role of Government and Hotel Operators”.

Mrs Akosua Frema Osei-Opare, the Chief of Staff, who received the award and in a statement read on behalf of President Akufo-Addo, commended the Association for the honour done him saying “I am truly humbled and very grateful”.

President Akufo-Addo on September 2018 at the Washington Press Club in the United States proclaimed 2019 as the “Year of Return” which commemorated the 400th anniversary of the time when the first 20 West African slaves were brought to the Commonwealth of Virginia, which subsequently became part of the United States of America, thereby initiating one of the most unfortunate and barbaric Trans-Atlantic Slave Trade.

The President said 2019 was a monumental year for the tourism industry as there was a steady flow of visitors, rising to a crescendo in December 2019.

He said throughout the year, businesses across the value chain-airlines, hotels, car rentals, and restaurants reported a significant growth in numbers, adding that through the initiative and backed by a strong marketing push, the country had seen a year-on-year increase in hotel occupancy rate.

Some hotels were on record to have experienced more than double the occupancy rate than they did the year before.

To sustain the interest and solidify the impact of the ‘Year of Return’, President Akufo-Addo announced another initiative, “Beyond the Return” which is a 10-year programme that seeks to influence several core areas of the country’s relationship with the diaspora and provide business opportunities across the tourism value chain.

He said Ghana was chosen by the African Union to host the Secretariat of the African Continental Free Trade Area, stressing that the opportunity would boost the tourism and hospitality sector greatly and urged the hotels to maximize the full benefits of the initiative.

President Akufo-Addo said the theme underscores the need for shared responsibility between the public and private sector players in order to deal with the challenges confronting the industry.

“I have asked the Madam Barbara Oteng Gyasi, the Minister for Tourism, Arts and Culture to fast-track the ongoing discussions with the Trade, Industry and Tourism Sub-Committee of Parliament on the challenges that the multiplicity of regulatory mandates and fees poses to hoteliers”.

“We must all work together through engagements to ensure that we keep hotel prices down and thereby lay a solid foundation for the growth of the Ghanaian tourism industry”, he said.

Here's Why We're Not At All Concerned With African Energy Resources's (ASX:AFR) Cash Burn Situation