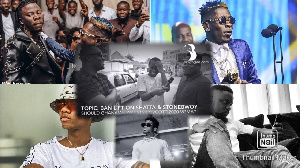 Should the ban on Shatta Wale and Stonebwoy be lifted?

For the love of the Ghanaian Entertainment industry, Blagogee.com with his two wise men widely known as Kwesi Dope and Eugene Baah shared their take on whether “Shatta Wale and Stonebwoy’s ban should be lifted”.

On Accra-based 3FM, GHAMRO Executive member Rex Omar affirmed that the board shouldn’t lift the ban placed on the artistes.

The host of Boom Box aired on Amansan Television Kwesi Dope shared a thought-provoking suggestion in the twenty three minutes video as he asserted that the board should rather make them the host for 2020 Ghana Music Awards.

He explained that, without Shatta Wale and Stonebwoy there will be something missing in the award scheme hence the board should rather make them host of the popular event.

Meanwhile Eugene Baah opined that the board shouldn’t allow Shatta Wale and Stonebwoy to be the host for the annual Vodafone Ghana Music Awards so the artiste can learn from their past mistakes.