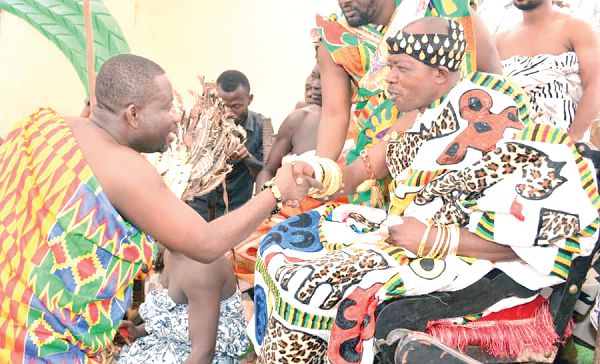 The Tepa Traditional Council, has honoured the Director-General of the National Disaster Management Organisation (NADMO), Mr Eric Nana Agyemang-Prempeh, for his contribution to the development of the traditional area and the country.

Led by the Omanhene of the area, Nana Adusei Atwenewa Ampem, the Traditional Council last Saturday enstooled the Director-General the “Ahenbronumhene” of Tepa.

Ahenbronum is the suburb in Tepa where the Palace of the Omanhene is located.

The ceremony took place at the 20th anniversary of the enstoolment of the Nana Ampem at Tepa in the Ashanti Region.

A citation presented to the NADMO boss, who is a native of Tepa, mentioned how he started off as the Presiding Member of the Ahafo Ano North District at the age of 28 and as District Chief Executive, worked assiduously to propel the development of the district to greater heights.

It said Nana Agyemang-Prempeh was instrumental in the establishment of the Tepa Nursing Training College, the securing of the new district hospital and the elevation of the district police station to divisional status among other developments.

The NADMO Director-General was also eulogised for putting NADMO and Ghana on the global spotlight.

Among other things, he was hailed for leading his team to extend aid to the government of Sierra Leone when they were faced with mudslides in 2017, an exercise supervised by the Vice- President, Dr Mahamudu Bawumia.

The Minister of Energy, Mr John Petter Amewu, who was the guest speaker for the event, extolled the virtues of Nana Agyemang-Prempeh as a hardworking person.

Mr Amewu conveyed the compliments of President Nana Addo Dankwa Akufo-Addo to the chiefs and people of the Tepa Traditional Area for the honour done Nana Agyemang-Prempeh, a trusted appointee of the President.

The minister announced to the gathering, the donation of some transformers, 10, 000 energy saving bulbs, 500 street lights and 200 bags of cement to support the development of Tepa, including the construction of a community stadium.

He urged the people to continue to support the President and the government to do more for the people.

In his acceptance speech, Nana Agyemang-Prempeh entreated all sons and daughters of the Tepa Traditional Area to live in unity and support the development of the town.

He admonished traditional authorities and the general public to go the extra mile to ensure that lands sold or purchased for any activity were not in waterways.

He also pleaded with Parliament to include traditional rulers as members of the disaster committees at the regional and district levels to help check how lands were sold without proper planning and checks.

He further pledged that NADMO would do its best with regard to responsiveness to disaster.