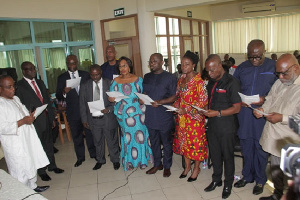 The Board Members were tasked to work without fear of favour

The media, over the years, have played crucial roles in the country’s democratic dispensation.

They have not only been at the forefront of Ghana’s democratic journey but also helped in steering the affairs of state, for which reason the country has reaped the benefits and dividends of democratic accountability and governance.

Due to the role and importance of the media, their freedom and independence are guaranteed under Article 162 of the 1992 Constitution.

The Daily Graphic welcomes the new boards. It is our expectation that they will provide the needed policy direction that will propel state-owned media organisations to effectively discharge their constitutional mandate, as stipulated in Article 163 of the 1992 Constitution — to provide fair opportunities for people to present divergent and dissenting views on national issues.

Inaugurating the boards, the Chairman of the NMC, Mr Yaw Boadu-Ayeboafoh, urged the members to be independent and act in the interest of their respective media organisations.

He also declared that the NMC would not interfere with or undermine the work of the boards.

We want to add our voice to this advice and emphasise that the independence of state-owned media organisations is not just about editorial policy but also seen in terms of corporate and business-related decisions.

The board members must, therefore, act without fear or favour and ensure that the ultimate winners in their endeavours are their media organisations and the country at large.

The framers of the 1992 Constitution knew that the media, especially the state-owned, would be very crucial to national development.

They, therefore, created the NMC to insulate the media from any form of control which would negatively impact their operations.

In this vein, although the board members are appointed by the NMC, in consultation with the President, they do not serve at the behest of the President or the NMC.

The Daily Graphic is also excited about assurances from the NMC’s Chairman to continuously support the boards to succeed.

State-owned media organisations face a plethora of challenges, such as financial difficulties and a difficult operating environment.

The boards will, therefore, need all the available innovative support in order to succeed and drive their media organisations to continuous growth.

While praying for support and goodwill for the boards, we also call on them not to plug their ears to suggestions and advice which can help them to succeed.

Again, in this era of unguarded statements and personality attacks by some political actors, we call on the boards not to be distracted by comments meant to stop them from implementing bold and pragmatic decisions that will have a positive impact on their media organisations.

We wish the boards well and pray that they discharge their mandate effectively, but we want to add that their duty to provide directions for state-owned media organisations will be meaningless if their media organisations become worse off under their watch.