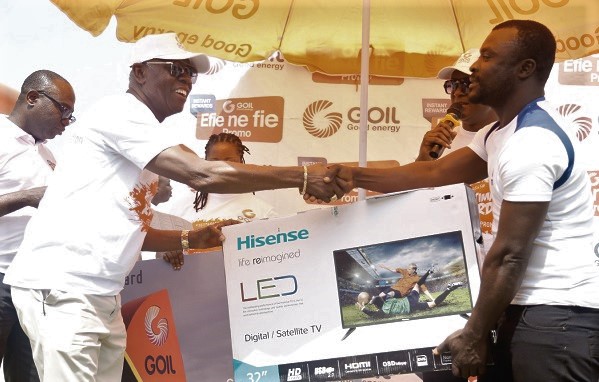 The second national ultimate rewards of the ongoing GOIL ‘Efie ne Fie’ promotion has been held at the Kentinkrono GOIL Service Station in Kumasi where 800 more customers received their rewards ranging from GH¢300 to GH¢1,000 of free fuel.

The top three customers, who accrued the highest points in the middle belt zone, in addition to the GH¢1,000 free fuel, also received a 32-inch colour television set each donated by the Kentinkrono GOIL Service Station.

The rewards were in addition to the thousands of instant rewards given to customers who bought fuel worth 100 cedis or more (and 30 cedis for motorbikes) from any GOIL station.

At the ceremony, the MD/Group CEO of GOIL, Mr Kwame Osei Prempeh, said the recipients were made up of taxi drivers, trotro drivers, truck drivers, private cars, SUV car owners, and bicycle as well as tricycle owners.

“These customers, made up of private and commercial vehicle owners, have shown total commitment to the GOIL brand. These rewards are our way of saying thank you for continually making us number one.

We, therefore, implore you to continue to buy more from GOIL because when you do, you are helping to develop mother Ghana,” he added.

He said GOIL would continue to put the customer at the core of its business.

The Board Chairman of GOIL, Mr Kwamena Bartels, noted that the diverse backgrounds of recipients showed that GOIL was for everybody. He gave an assurance that the company had taken a number of steps to diversify and strengthen its operations.

Edmontonians rally in support of political prisoners held in Belarus

When Does Ghana Remember Her Assets?