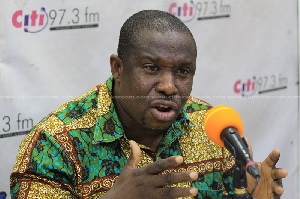 Member of Parliament for North Dayi, George Loh says the Public Accounts Committee causing the arrest of two financial officers on Monday, January 21, was in the right direction.

The legislator who commended the committee for the action in an interview on Citi FM’s Eyewitness News said the chairman exhibited courage when he made the call.

The chairman of PAC, James Avedzi, on Monday, ordered the arrest of both the former and current district finance officers of the Sefwi Akontombra District Assemblies.

The two men, Isaac Akowaah and James Esilfie were accused of conniving to lie to the committee over irregularities cited in the Auditor General’s report.

This was after the committee confirmed through an auditor’s report that the accounts being given on some 62 payment vouchers which couldn’t be traced by officials of the district were not adding up.

“You want to hold the committee to ransom; that the two of you [connived] to try and deceive this committee…we are going to lock you up. The police will take a statement from you and that statement will be used against you in the law court. We [the Public Accounts Committee] will not prosecute you. [Instead] The government will take over [this case],” Mr. Avedzi told the two men.

Reacting to this development, George Loh said the chairman has shown the way.

“This is what possibly would have been needed long ago but maybe the chairmen of that time did not point out to that direction, but I am happy that something has happened. If there was anything that the PAC needed to give Ghanaians confidence in its work, it is the ability to bite.”

He added that the Public Accounts Committee has a duty to protect state properties.

“I think that even though it is not spelt out in the Constitution explicitly in its mandate, I think that by implication, since the chairman of the PAC or the committee itself is working in the interest of Ghana, they have a duty to protect the properties of the state and therefore if they have found that someone was dealing with a property of the state in such a way that was suspicious, they have the right to report the person to the law enforcement agencies and that is what the chairman and his counterparts have done and kudos to them once again.”

Sack MMDCEs if you're serious about galamsey fight: Ghanatoday.net