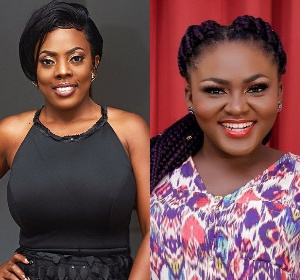 A new wave of allegations has been levelled against veteran journalist, Nana Aba Anamoah, this time, about her supposed involvement in linking unsuspecting ladies to men in exchange for money.

According to Onua TV’s presenter, AJ Poundz, the GHOne news editor runs a pimp business through which she links young girls to men in exchange for money.

She alleged amongst other things that, Nana Aba Anamoah used her media school she established some years ago as a ‘recruitment agency’ to run the business.

“Someone even came to my DM to tell me that she was in Kofi Abban’s house when Nana Aba came there to conduct one of such businesses of which she was given 20k…It’s a problem, why don’t you go alone and leave our girls alone, girls prefect. Why?” AJ Poundz questioned.

This ended the first round of allegations, the second wave opened with what she described as Ms. Anamoah and her friend, Sandra Ankobiah’s deliberate attempt to pimp unsuspecting girls who were students of her now-defunct media training school.

In her words, “On a more serious note, a lady sent me a message indicating that she was one of the students of the now-defunct media school which belonged to Nana Aba Anamoah at Kokomlemle. She said Ms. Anamoah was taking them places to link them to men to sleep with them in exchange for money. In the aftermath, Nana Aba Anamoah would give them 40 per cent of the money.”

To affirm her utterances, AJ Poundz added that the lady who gave the information swore on her life that it was the truth she was telling.

AJ Poundz made these allegations on her show, Nkonkonsa Headquarters on Onua TV.

Meanwhile, Nana Aba Anamoah has declined to comment on the issue. She told www.ghanaweb.com she doesn’t “know the TV station” the said lady spoke on and she is “not interested in speaking about it.”

Kelvyn Boy is just a talented kid I always want to work with: Ghanatoday.net

How the IMF and United Nations assessed Akufo-Addo’s performance