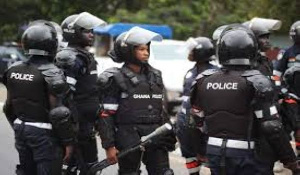 The Accra Regional Police Command in the early hours of Monday, gunned-down two suspected armed robbers believed to be part of a notorious gang operating within the Accra, Tema metropolis.

They were identified as Ali Abba alias Ali Hero and Charles Donkor, alias Killer boss who had been on police wanted list for some time now.

Ali and his gang embarked on series of robberies including robbing and raping a resident who lives close to Trassaco, and that specifically on October 7, 2019, Ali and his accomplice: Rambo, Fuseini, C.J. and Raymond, attempted to rob a resident at Anyaa, but C.J. was shot dead by their victim.

He said the Regional Police Intelligence Unit on January 19, upon a tip-off gathered that a gang of robbers were going to embark on an expedition at Oyibi and Apollonia, all suburbs of Accra.

He said at about 0115 hours on January 20, a team of police personnel proceeded to Oyibi on surveillance.

The Regional Commander said close to the Oyibi Check Point, the team intercepted a green hardbody Nissan Pick-up with the suspected robbers on board.

The Police Commander said the driver sped-off when the police signalled him to stop but the team pursued it and realising police were closing in on them opened fire of which the police returned fire which led to the deaths.

He said Donkor, who was injured after the shootout was sent to the hospital but he was pronounced dead on arrival.

He explained that his accomplices managed to escape but police intelligence led them to their hide-out at Bawleshie near Dodowa.

Mr Adu Anim said over there they also engaged the police in a shoot-out which claimed the life of Ali but the rest escaped.

He said one SMG Mark Riffle, two Mark 2 Riffles, one G3 219 mm ammunition, one Mark 4 Riffle, two hammers, 47 rounds of AK 47 ammunition, six G3 ammunitions, a pair of handcuffs, two axes and a face mask were found in the car of the alleged robbers.