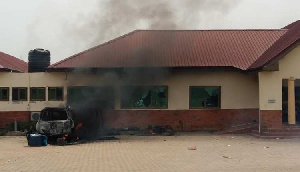 Marauding youth of Dzolo-Gbogame in the Ho West District of the Volta region on Wednesday morning chased the District Chief Executive (DCE), Ernest Victor Apau and other members of staff of the district assembly out of their offices, MyNewsGh.com reports.

A pickup truck belonging to the district assembly was also set ablaze by the rampaging young people, sending a thick billow of smoke into the morning sky.

The youth’s action followed the death of a resident who was reportedly knocked down by one of the assembly’s vehicles during a routine revenue mobilization exercise in the area before midday.

The truck that had been parked in front of the district assembly building has been burnt beyond recognition and the whole town has been thrown into a state of shock, MyNewsGh.com reporters say.

Journalists who attempted to record the onslaught were also beaten.

Reporters of the Ghanaian Times Newspaper and the Ghana News Agency (GNA) had their tablet and side mirror of their vehicle damaged respectively.

At the time of filing this story, no arrest had been effected by the Ho police; it was also unclear whether the DCE and other members of his staff who bolted had mustered the courage to return to their offices as efforts to reach any of them proved abortive.