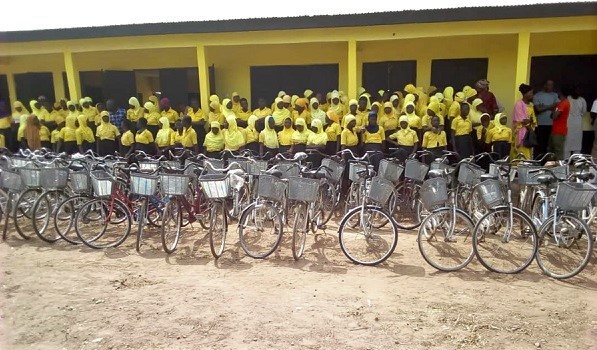 A three-unit classroom block has been inaugurated for a girls junior high school in Kpalga, near Bimbilla in the Nanumba North Municipality of the Northern Region.

The GH¢180,000 facility, constructed by the assembly from its share of the District Assemblies Common Fund (DACF), has also been furnished with marker boards and furniture.

The school, which serves a number of communities, including Bimbilla and its environs, was built in 2012 to promote girl child education with an initial enrolment of 15 students which has now increased to 150.

It was first established in a temporary structure and named Naa Abdulai Day Care Centre in the Nanumba North Municipality and later moved to Kpalga in 2012 and renamed.

The assembly also furnished the block with 600 pieces of dual desks at a cost of GH¢200,000 and donated 80 of bicycles valued at GH¢28,800 to the school to assist students who trekked long distances to the school on foot.

At a handover ceremony, which was attended by the chiefs and people of the area, the Nanumba North Municipal Chief Executive (MCE ), Mr Abdulai Yaqoob, underscored the need to lay a proper foundation at the basic levels of education to enable students to move to the senior high school and tertiary levels so as to make meaningful contributions to society.

He said the assembly would continue to invest in the provision of educational infrastructure, particularly in areas without classroom blocks to enable school children to also climb the academic ladder, since education was key to national development.

Mr Yaqoob advised teachers and students to maximise their output at all levels as the success of the free Senior High School (SHS ) programme depended on the quality of students.

He indicated that the school building alone would not work unless the community members, including the teachers and the students, worked together.

The MCE said within two years the school would also get a dormitory block, bungalow and a fence wall.

For his part, the acting Municipal Education Director, Mr Yaw Sarfo, urged the headmaster, teachers and students to keep the facility and the other equipment donated to the school very well.

The Head teacher of the school, Mr Ibrahim Iddrisu, thanked the assembly and the Municipal Education Directorate for putting up the new building.
He advised the beneficiary students to keep the bicycles well to ensure that the future generations would also benefit.

Some students, who interacted with the Daily Graphic after the presentation, were full of appreciation to the government and the assembly for providing a new building and a new bicycles to the school.

What to know about the viral outbreak in China

What to know about the viral outbreak in China

Biz development as political tool? No, thanks | News, Sports, Jobs