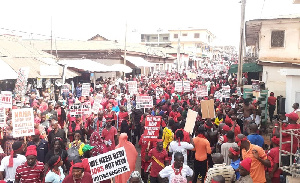 Some Ghanaian minority parties have rallied the citizenry to stand up against moves by the Electoral Commission (EC) to compile a new voters’ register ahead of the 2020 general election.

“In our view, any attempt to create a new register will be a recipe for disaster since it has the potential to generate misunderstanding amongst the people,” Mr. Johnson Asiedu-Nketiah, General-Secretary of the National Democratic Congress (NDC), noted.

The current register, he said, was untainted having been used successfully in all previous major national polls, and, therefore, urged the EC to rescind any decision or attempts to compile a new one.

Mr Asiedu-Nketiah, who was addressing an inter-party demonstration in Kumasi, to register their protest against the compilation of a new voters’ register, said a new register “could plunge the nation into political turmoil.”

“The inter-party coalition is advising the EC to listen to the voice of the people and resolve to soften its stance for peace to prevail,” he insisted.

The demonstrators held placards some of which read, “We Need Jobs, Not New Register”, “Don’t Touch Our Cherished Voters’ Register”, “Don’t Destroy Our Democratic Credibility”, “EC Must Let Cool Heads Prevail”, “Ghana Must Speak”, amongst others.

Clad in red and black attire, the demonstrators having made a procession through some principal streets of Ghana’s second largest city, later converged at the Jubilee Park, where they were addressed by the leaders.

Mr. Bernard Mornah, of the PNC, said the nation had for sometime now served as a beacon of hope for most politically embattled African countries due to her enviable record as a democratic country.

The EC, he said, should as such not make any move likely to affect the political stability of the nation.

“We are all partners in development. The EC should do due diligence in the decision to compile a new voters’ register, because posterity will judge us if our actions lead to chaos,” he stated.

Nana Agyenim Boateng, Founder of the UFP, warned that the inter-party coalition would continue to hit the streets until the EC rescinded its decision.

This is not your time

Women’s place in the growing charcoal sector in Africa

Women’s place in the growing charcoal sector in Africa

Election 2019: The defeated MPs deciding what to do next

Social Movements and Political Representation | About

The Day – Executives grapple with ripple effects of political turmoil

Rawlings of Ghana or Africa?