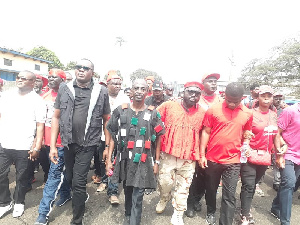 The Interparty Resistance against the compilation of a New Voters Register has disclosed plans to petition the Asantehene Otumfuo Asantehene Osei Tutu the second.

The coalition which held a mammoth demonstration in the Ashanti regional capital Kumasi contends the Electoral Commission’s plans to acquire a new Biometric Voter Information Management System with facial recognition enhancements and its attendant compilation of a new voters register is technically unjustifiable.

They further insist the amount of money for the two propositions running into some 390 million cedis amounts to a tradeoff between selfish interests and the stark developmental needs of the Ghanaian.

The demonstrations took Kumasi by storm as the protestors meandered their way through the Asawase Police Station road through to the Asare Original Pay All Office enclave,

It continued through the Central business district all the way to the Jubilee Park where the leaders of the demonstrations and the political parties present addressed the thousands that continue to join the long trail.

Addressing the protestors, the National Chairman of the PNC, Bernard Mornah commended the region for demonstrating its massive support by coming out in their numbers to register their protest.

He insisted that the coalition will go all lengths to ensure that Ghana does not go into a major national election with a new electoral register which has not been tried, tested and approved by Ghanaians.

“As we matched through the principal streets of Kumasi, it became evident that if the electoral commission wants to take the people of Ghana for granted, they cannot take the people of Ashanti for granted. The voters’ register that we currently have, has produced President John Dramani Mahama. It produced President Akufo Addo. It has been tried and tested and approved by the people of Ghana. The new voters register that the electoral commission intends to bring, has not been tried, tested and approved so ‘Yempene,” He charged.

He outlined that the group will match to Accra, Ho, Damango, Takoradi, Takyiman, Sunyani and anywhere it can go, to tell people that they will not agree with the Electoral Commission.

He added that after the ceremony, “we shall be petitioning Otumfuo to tell him that what the Electoral Commission is doing will bring calamity to Ghana and we don’t want calamity.”

The New Patriotic Party in the Ashanti region has however indicated that it is not perturbed by the exercise which it describes as fruitless.

Its Ashanti regional Chair Bernard Antwi Boasiako told the media before the Yempene Demonstrations he had begun a vigorous training of the party’s grassroots to prepare themselves to support the exercise which the Electoral Commission has slated will begin in April.

Some Civil Society groups and policy think tanks under the Ghana Anti Corruption Coalition have also expressed their disagreement with the argument put out by the Electoral Commission on the compilation of a new voters register.

They insist it is the mandate of the National Identification Authority which is clothed with the duties to carry out a compilation of national data which the Electoral Commission can feed on to update its systems.

Ghana is back to square 1 and worse