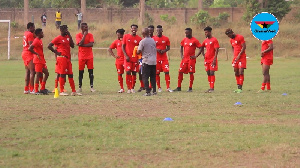 Accra Hearts of Oak are set to unleash their new striker, Abednego Tetteh in their game against Asante Kotoko on Sunday in matchday six of the 2019/20 Ghana Premier League at the Accra Sports Stadium.

Abednego Tetteh was part of coach Edward Odoom’s 24 man team which trained yesterday at the club’s training grounds in Pobiman.

The tall striker who is yet to make an appearance in any competition for the Rainbow Club showed much readiness for Sunday’s game giving out his best at training.

Tetteh who has a lot of experience in the Ghana Premier League is one of the first two players to score a hattrick in the 2015/16 Ghana Premier League season. The prolific striker netted 14 goals for Bechem United and played an instrumental role as the team won the MTN FA Cup against Okwawu United that season before seeking greener pastures abroad. With such a feat, Tetteh’s experience will come in handy for Hearts of Oak who have scored just 4 goals in five games.

The former Al-Hilal forward could be the key to coach Edward Odoom’s goalscoring problems and might as well feature in the game against their fearsome rivals, Asante Kotoko in a bid to add gel to the Phobians attack.

The striker has also revealed his readiness to debut in the game against Kotoko after watching three games of his club from the stands. Hearts of Oak are 9th on the league table with 7 points whiles their opponents are placed 7th with 9 points in 5 games.

Ghanaweb’s Joseph Adamafio was at the Hearts of Oak training grounds and has filed this report below.

Politicians Are Quoting The Founding Fathers On Impeachment. Some Are Cherry-Picking - NPR