Ghana is ready for the world — President Akufo-Addo: Ghanatoday.net 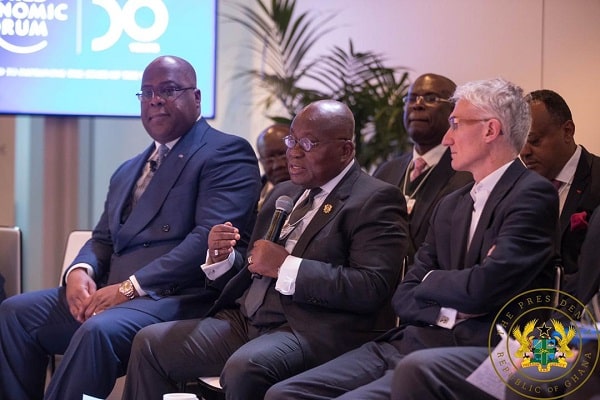 President Akufo-Addo speaking to guests at the event in Davos, Switzerland

President Nana Addo Dankwa Akufo-Addo has maintained that Ghana’s human resource base remains its biggest asset with which it stands ready to partner the world to build a prosperous nation.

Addressing an upper crust of the global investor community in Davos, Switzerland, last Wednesday night, the President said the Ghanaian people were welcoming, hospitable, kind, hardworking, generous and eager to work with investors who established their presence in the country and were equal to the task of adding value to its natural resources and to help it industrialise.

President Akufo-Addo was addressing the Ghana Country Dinner organised by the Ghana Investment Promotions Centre (GIPC) for the investor community on the sidelines of the World Economic Forum (WEF).

He said in spite of all the gains that his government had attained, particularly in stabilising the economy, what mattered to him most was the people.

President Akufo-Addo said he belonged to the generation that believed very strongly that the 21st century was for Africa, with Ghana at the forefront, “and it is going to be so, God willing”.

He traced Ghana’s history as the first independent African nation which assisted other countries under colonialism to also become free and independent, adding that that significant move had always defined Ghana’s destiny on the continent.

He likened the country’s chequered history to a baby learning to take its first steps, noting that the baby was bound to fall, then get up and, with time and practice, learn to walk and run.

He said after going through military dictatorships and luckless Republics, Ghana’s Fourth Republic had come to stay.

The President said the Fourth Republican dispensation, which came into being in 1992, had not only witnessed seven elections but also recorded three smooth transfers of power, making it the most stable period in the country’s history.

He said Ghana had a well-established functional democracy and it was extremely important that the trajectory was continued because the rights of the people, their liberties and human rights and the rule of law mattered.

President Akufo-Addo said Ghana was building a judicial system where judges decided on cases independent of interference from politicians or the President, adding that it also believed that a strong market economy was the way to go.

He said it took a strong market economy, with vibrant business enterprises, to deliver the kind of prosperity that Ghana was yearning for, saying that in achieving this, Ghana, even though Pan-African in outlook, would also be reaching out to the wider world and make friends with those who wanted to befriend the country.

He said the freedom to choose who Ghana’s friends were was a very important matter for the Ghanaian people, adding: “Nobody can tell us who to be friends with or who not to be friends with; we will make that decision ourselves.”

The Finance Minister, Mr Ken Ofori-Atta, said the macroeconomic position that the New Patriotic Party (NPP) administration came to meet was abysmal, with many people in the country in doubt about the President’s pronouncements on assuming office to produce an economy that was disciplined and focused on making gains.

He said within three years of being in power, the government had brought inflation down from 15.4 per cent at the end of 2016 to 7.9 per cent as of last month, with the Gross Domestic Product (GDP) being at an all-time high.

He said further that the economy had recorded a primary fiscal balance, with the current accounts having a surplus for the first time in many years, which meant that the rate of debt accumulation was much lower, allowing for interest payments.

Mr Ofori-Atta said the President had directed the creation of social good and improvement in the ease of doing business.

The key to achieving these, he said, was the decision to make secondary education free for the people, so that no child was left behind.

The Finance Minister said the government had chosen to spend over six per cent of GDP and 28 per cent of its budget on education to ensure that no child in the country was denied secondary education.

Clarifying Ghana’s position as host of the African Continental Free Trade Area, Mr Ofori-Atta said the country once led Africa’s political liberation and would again lead Africa in a trade and industry revolution.

Why We Need Bipartisan Stakeholder Politics

Sport unites us when politics divides