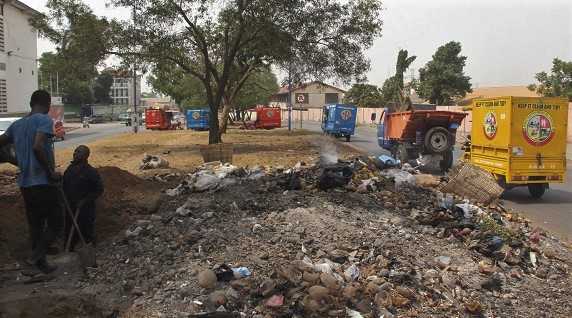 The law enforcement team of the Accra Metropolitan Assembly (AMA), together with some security guards of the Graphic Communications Group Ltd, yesterday (Thursday, January 23) clamped down on some individuals who dump refuse in the median of the road opposite the Accra Brewery Limited.

This follows a publication by the Daily Graphic on Thursday, January 23, 2020, which highlighted the mess the unauthorised dumping of refuse at that spot was creating.

Following the publication, a three-member team from the AMA, led by Mr Michael Armah, arrived at the scene on that stretch of the Graphic Road, to assess the situation.

It was joined by the Security Supervisor of the GCGL, Mr Divine Akoh, and just as they arrived at the scene, they found three persons dumping more refuse to add to what had already piled up at the spot.

The team quickly moved in and arrested one of the three men, Mohammed Fuseini, who attempted to flee after realising that he had been caught in the illegal act. The other two managed to escape.

After the arrest, it was agreed that the other members of the AMA team — Mr Richard Laryea, Agbo Minsah and Emmanuel Attoh — were deployed at the area to ensure that the illegal act was stopped as well as arrest those who may try to dump refuse at the same spot or any other unauthorised area on that stretch of road.

Shortly after the arrest, officials from the Korle Klottey Municipal Assembly (KoKMA) deployed a number of mini waste vehicles to collect the filth

The Municipal Environment and Health Officer of KoKMA, Mr Victor Acquaye, who spoke to the Daily Graphic on phone, explained that in spite of several announcements and actions taken by the assembly, the situation was getting worse.

“The spot on the Graphic road is not the only place that people illegally dump refuse.My janitors clear the rubbish and after that we monitor the place to ensure people do not dump waste there. Sometimes we even have to go the extra mile to get security personnel at post, which is expensive but has proven effective. 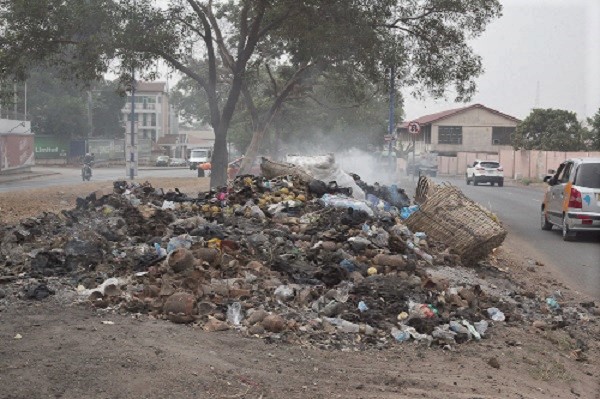 After the construction of stores at the site for a market close to the Graphic Press, the refuse dump was completely removed from the area as well as the dumping site near the Liberty Avenue Cluster of schools, reclaimed by the owners, the Presbyterian Church of Ghana, Official Town Congregation.

This has left the area without a dumping site, thus encouraging people to illegally dump the refuse anywhere they find convenient.