Agordzo: ‘I can never ever do anything to disturb the relative peace we enjoy in Ghana’: Ghanatoday.net


Embattled Assistant Commissioner of Police (ACP), Dr Benjamin Agordzo says he will never do anything that will disturb the peace that Ghana is enjoying.

ACP Agordzo has been of aiding some alleged coup plotters who themselves have been charged with treason on allegations of plotting to destabilise Ghana and possibly take over the government.

He was granted a GH₵500,000 self recognisance bail on Tuesday, January 21 but was released on Thursday.

Following his release, ACP Agordzo in a Facebook post expressed appreciation to his family and friends who stood by him during the time he spent in police custody.

He wrote: “It’s been a whole world of experience and I like to thank God for bringing me this far; my counsel and his team for standing by me with their knowledge and skills in law practice; and those of you who believed in me and supported me in various ways. My special thanks go to my wife, family and the Chiefs and people of Vakpo for their massive support. I appreciate you all.

“I was particularly strengthened by the fact that even thousands who had never set eyes on me believed that I couldn’t have done what I was being accused of. These sentiments were expressed in various social media platforms.

“For the millions who silently went on their knees regularly to intervene for me, God richly bless you. Your prayers were not in vain. I know you’ll continue to remember me in your prayers. The Lord of hosts is on our side and it’s not over until it’s over.”

He stated however that his belief in democratic values such as the rule of law, human rights and constitutional rule would not permit him to do anything that would go contrary to that.

“These are the things that drive the passion in me,” he said.

He added that “having spent about 6 years of my life in peace keeping missions in Sudan, Somalia and Haiti and witnessed how conflicts have ravaged those counties, I will be the last person to do anything to derail the strides we’ve made in democratic development.”

“Be assured that I love my country so dearly I can never ever do anything to disturb the relative peace we enjoy in Ghana. This is what I stand for and I’ll never exchange this for anything else,” he stated.

Nine individuals, including a medical practitioner, Dr Mac-Palm, and five soldiers, have been charged with treason on allegations of plotting to destabilise the country and possibly take over the government.

The others are Donyo Kafui, alias Ezor, a blacksmith; Bright Alan Debrah, a fleet manager, and Gershon Akpah, a weapons mechanic at the Ghana Armed Forces (GAF). 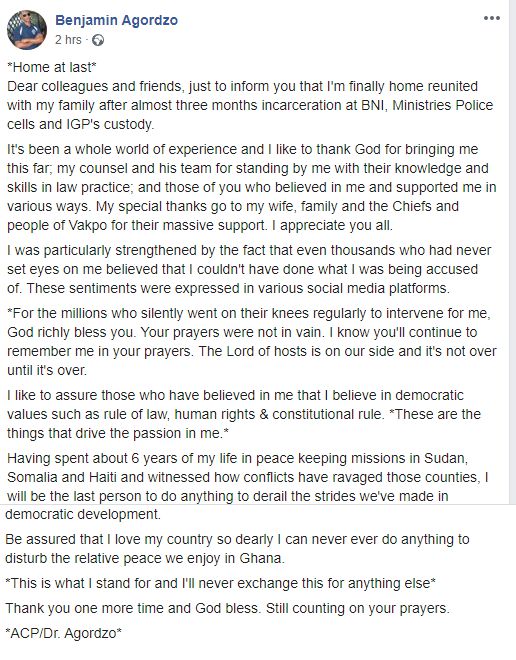