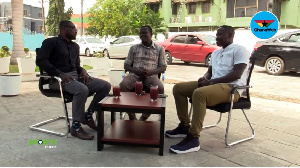 The special edition of Sports Check features two men who at their peak of were the toast of fans of their respective clubs.

While Bekoe’s heroism centres on the avalanche of goals he scored for Kotoko, Amankwah is revered for being the captain of arguably the greatest squad in the history of the Ghana Premier League – the 64 Battalions.

The legends open up on what they have been up to since leaving their respective clubs.

While Amankwah has now dedicated himself to grooming young players, Bekoe who last played for AFC Leopard in Kenya is working hard to keep himself in shape for a new club.

Both Amankwah and Bekoe tell funny stories of their experience with juju and its effect on players. Interestingly they both don’t believe in juju. CK Akonnor was recently named Black Stars coach and the Bekoe and Amankwah are calling for time and support for him.

On the game itself, Amankwah unsurprisingly predicts a win for Hearts of Oak, joking that Kotoko’s newboy Matthew Anim Cudjoe ‘has been placed under a table.’

Bekoe though not as boastful and confident as Amankwah believes that at the end of the day,

Maxwell Konadu’s men will pick three points. They also pass on wise counsel to young players, advising them to control their use of social media.

Watch the entire video below