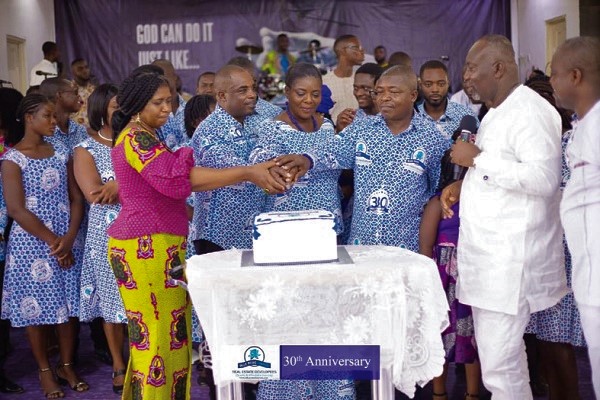 Mr Eric Ebo Acquah (2nd left) being joined by some staff staff to cut the anniversary cake while Rev. Jeremiah Boateng (2nd right) of the Sureway Assemblies of God looks on

Blue Rose, a Kasoa-based real estate company, has visited the Village of Hope (Orphanage) at Gomoa Fetteh in the Central Region to feast and dine with the children to mark its 30th anniversary.

Members of staff of the company interacted with the children and treated them to an assortment of food and drinks.

They also presented items such as boxes of water and soft drinks to the home to assist in taking care of the less privileged children.

Speaking to the children and caretakers of the Orphanage, the CEO of the company, Mr Eric Ebo Acquah, pledged future support for the orphanage and encouraged the children to take their studies seriously.

“As a company, we believe life should be enjoyed no matter one’s condition, and by sharing with these children we hope we have brought them some enjoyment,” the CEO of the Group remarked.

He said the celebration which began this month would be climaxed in August this year.

Giving a background of the company, Mr Acquah said it was incorporated and registered with the Registrar General’s Department in 1989 as a sole proprietorship known as the Blue Rose Florist with its main activities as landscaping and horticulture.

“In 2008, it was re-registered as a limited liability company with estate development as its main activity as it has remained till date,” he explained.

The management of the home expressed gratitute for the kindness shown and the smiles that the company had put on the children’s faces.

Brexit celebrations ‘rub our noses in it’, says Heseltine | Politics