Continue publishing false news about me; it will lead you to your mortuary: Ghanatoday.net 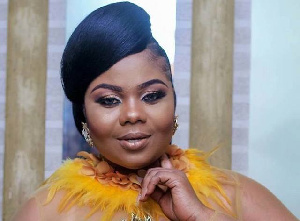 Award-winning gospel musician Gifty Adorye has descended heavily on a blogger for publishing what she says a false story about her.

According to Gifty, if the blogger does not the story, it might lead him to his early grave.

The singer made this revelation in an interview with DJ Nyaami on SVTV Africa while talking about the negativity in the industry.

She explained that, the issue happened some five years ago when she was mistaken for a woman who fell at a wedding reception in Worcester, USA.

She said, she called the blogger to pull the video down because she is not the person in the video but the said blogger did not heed to her call.

“A wedding went on in Worcester and in the video; a beautiful woman was seen passing by and unfortunately fell. All of sudden it was tagged us Empress falls while attending a wedding. But it’s not me I said everything but they say we resemble each other so it’s me”.

“I was so pissed and people were defending me – it’s not Empress and the comment are disheartening and it’s not me. That particular news, till date it pains me whenever I remember it because I know it’s not me but if you go to YouTube, you will see my name there and somebody is making revenue out of it. But he will keep making money with it till he gets his obituary if he doesn’t remove it from there – he knows himself.” She added.

Meanwhile Gifty, urged Ghanaian Media houses to be cautious of the kind of headline they use. She said, Media houses should focus on promoting our own and stop tarnishing the image of people and places.

Empress Gifty Adorye is currently promoting her new single titled ‘Jesus Over Do’ which is a song off her upcoming album.