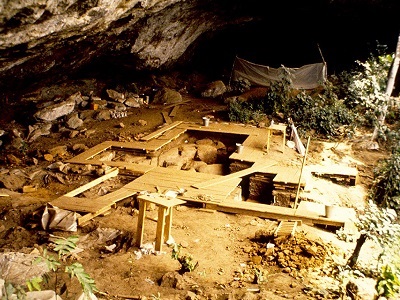 Shum Laka, a rock shelter in Cameroon and the location pinpointed by linguists as the probable cradle of Bantu languages, has yielded the DNA of a previously unheard of population of hunter-gatherers. Although the rock shelter was originally excavated in the 1980s and 1990s, a truly collaborative new study published in Nature upends our understanding of African lineages.

Bantu languages, a widespread and diverse group of languages spoken by more than a third of Africans today, was thought to have originated in west-central Africa before spreading across the southern half of the continent in conjunction with the switch from hunting-gathering to farming. This expansion is thought to be the reason why most people from central, eastern and southern Africa are genetically closely related to each other and to West Africans.

However, the DNA of four children buried 8,000 and 3,000 years ago that was sequenced in this study tells a different story. According to whole genome analysis, the children’s ancestry is closer to central African hunter-gatherers.

“This result suggests that Bantu-speakers living in Cameroon and across Africa today do not descend from the population to which the Shum Laka children belonged,” said Mark Lipson, professor at Harvard Medical School and lead author of the study. “This underscores the ancient genetic diversity in this region and points to a previously unknown population that contributed only small proportions of DNA to present-day African groups.”

The unknown population, referred to as the “ghost population”, indicates the existence of four—not three— major deep human lineages that contributed to people living today.

Established models of human origins suggested that present-day southern African hunter-gatherers, who split from other populations about 250,000 to 200,000 years ago, represent the deepest known branch of modern human variation. However, according to Lipson, the new analysis “suggests that the lineage contributing to central African hunter-gatherers is similarly ancient and diverged from other African populations around the same time.”

In addition to the DNA of the Shum Laka children, researchers examined previously published DNA from ancient hunter-gatherers from eastern and southern Africa, as well as DNA from many present-day African groups. Combining these datasets revealed yet another set of four human lineages branching between 80,000 and 60,000 years ago—including the lineages contributing most to present-day eastern and western Africans and all non-Africans.

Thus, the authors conclude that about one-third of the ancestry of the Shum Laka children derived from a lineage closely related to central African hunter-gatherers, while two-thirds of their ancestry came from a distinctive lineage distantly related to a majority of present-day West Africans.

Lastly, researchers discovered that one of the male Shum Laka children carried a rare Y chromosome haplogroup (A00) found almost nowhere outside today’s western Cameroon. A00 is best documented among the Mbo and Bangwa ethnic groups living not far from Shum Laka, but this is the first time it has been seen in ancient DNA. A00 is a deeply divergent haplogroup, having split from all other known human lineages around 300,000 to 200,000 years ago. According to the study, this indicates that the oldest known lineage of modern human males has been present in west-central Africa for more than 8,000 years—perhaps longer.

This research was a true collaboration, spanning disciplines and continents. Counted among the paper’s 34 authors are geneticists, archaeologists, biological anthropologists and museum curators based in America, Canada, Belgium, Central Africa, Spain and China.

The international research team plans to return to Shum Laka this year, in part to communicate findings to the Cameroonian community.

“Interdisciplinary collaborations like this one are an essential part of ancient DNA research,” said David Reich, professor at Harvard Medical School and senior author of the study.

Photo: The Shum Laka rock shelter in Cameroon, home to an ancient population that bears little genetic resemblance to most people who live in the region today. Credit: Pierre de Maret