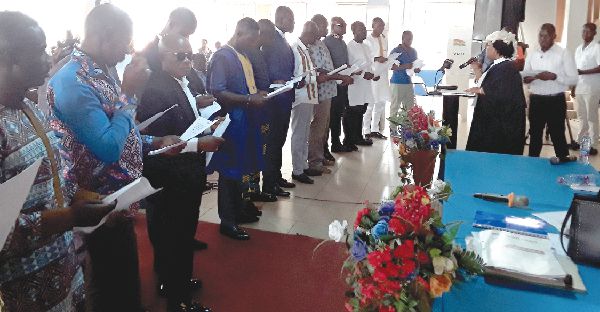 rs Rosemarie Afua Asante, a magistrate, administering the oath of office to the new assembly members at Asokwa

The two candidates who offered themselves to be elected, Mr Oscar Richies alias Ghana Beyeyie, and Mr Bismark Osei Tutu, failed to garner the maximum votes to enable them to be elected as PM.

After two rounds of voting, the officials from the Electoral Commission (EC) rescheduled the voting to a new date that will be announced later.

In the first round of voting, both candidates had nine votes each from the 18 members present and in the second round, Mr Richies had 10 votes while Osei Tutu polled eight.

The assembly is constituted of 20 members with 14 elected and six government appointees.

The election in one of the electoral areas, Atonsu Kuwait, is however on hold pending a court issue.

Earlier during the inauguration of the new assembly members, the Minister of Parliamentary Affairs, Mr Osei Kyei-Mensah-Bonsu, entreated the members to be guided by the rationale of the decentralisation process and work in unity to bring development to the people.

From Ho, Bright Selase Afavi reports that the Minister of Health, Mr Kwaku Agyeman-Manu, last Thursday inaugurated the 29-member Ho Municipal Assembly with a call on the members to spearhead the development of their assemblies to create employment for the youth.

He said one major challenge was the unplanned development currently going on in most assemblies.

He said houses built on watercourses had become a phenomenon with serious implications to national development and public service.

Mr Agyeman-Manu asked the assemblies to create a platform for stakeholders using social accountability tools, including town hall meetings and general community engagements to establish a strong linkage between duty bearers and citizens.

Mr Duncan advised assembly members to desist from dragging issues that could be easily resolved to fast-track the progress of district assemblies.

The impressive ceremonies were graced by traditional rulers, members of both the ruling New Patriotic Party (NPP) and the opposition National Democratic Congress (NDC), as well as members of the general public. 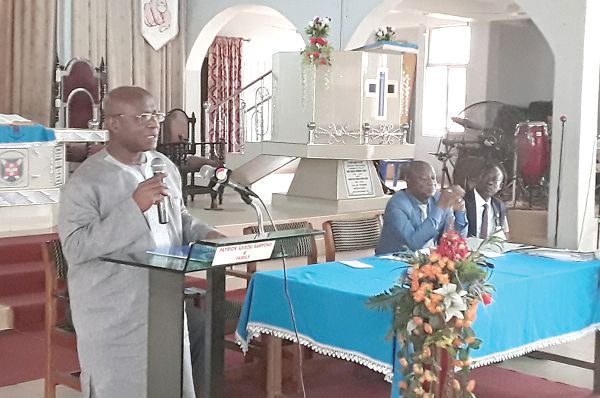 In the Agona West Municipality, none of the two candidates who put themselves up to be elected as presiding member secured the two-thirds majority votes after two rounds of voting.

In the first round of voting, Frank Yeboah, the Assembly Member for Lower Bobikuma, had 20 votes while Frank Abban, an appointee, secured 17 votes with eight votes rejected. In the second round, both candidates had 20 votes each while 5 votes were rejected.

In Agona East, however, Nana Kwao Ponsi II went unopposed and was duly elected the Presiding Member of the assembly.

Biiya Mukusah Ali reports that a 36-member assembly of the Techiman North Assembly failed to elect a presiding member after two rounds of voting because the candidates did not obtain the required two-thirds majority.

The District Chief Executive for Techiman North (DCE), Mr Peter Mensah, urged the assembly members to support the assembly to package and market socio-economic potentials of the district to attract investors and businesses.

At Odomase in the Sunyani West District, the 57-member assembly was inaugurated by the Minister of Youth and Sports, Mr Isaac Kwame Asiamah, reports Emmanuel Adu-Gyamerah.

He advised the assembly to diligently implement the various government initiatives in order to create jobs for the youth in the areas.

Ezekiel E. Sottie reports from Atimpoku in the Eastern Region that 54 elected and appointed assembly members for the Asuogyaman District Assembly were last Thursday sworn in for the next four years.

They were made up of 37 elected members and 17 government appointees, including the district chief executive and the member of Parliament of the Asuogyaman Constituency.

The Asuogyaman District Magistrate for the Senchi Magistrate Court, Mr Seth Adiedum Alafa, who swore in the assembly members, cautioned them to stick to the oaths they swore and not to divulge any information of the assembly if they were not asked to do so.

He said any assembly member who divulged any information to the general public illegally would face sanction as the law stipulated and urged them to be cautious of that. 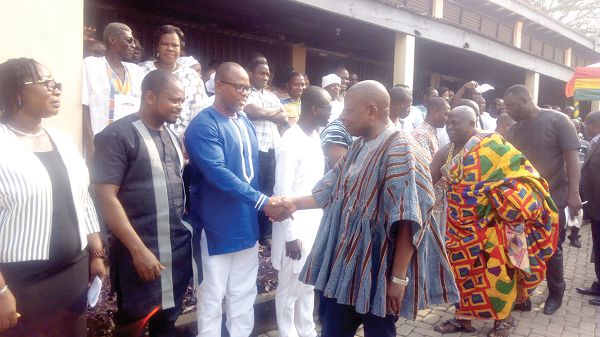 Mr Kwaku Agyeman-Manu in handshake with an assembly member

Six out of the 11 local assemblies in the Upper West region on Thursday failed to elect their presiding members, pursuant to the Local Government Act (2016).

Assembly members in the Wa and Jirapa municipalities as well as those in the Daffiama Busie Issa, Nadowli-Kaleo, Lambusie, and Wa West districts could not settle on any of the presiding members (PM) aspirants with a two-third majority as required by the Act after two rounds of voting.

Whereas all the 11 Municipal and District assemblies in the region were inaugurated, voting for the election of presiding members in the six assemblies was adjourned until the next 10 days when sitting is expected to resume.

Assembly members in the Wa East District assembly, however, pulled a surprise by electing their PMs in the first round of voting; the first since the creation of the assembly in 2004.

The Nandom, Lawra, Sissala East and West Assemblies also managed to elect their respective presiding members without any major hindrances.

Interior Minister, Ambrose Dery, Minister of State in charge of Agriculture Nura Gyiele, Upper West regional minister Dr. Hafiz Bin Salih and his deputy Amidu Issahaaaku Chinnia represented the President at the inauguration of the assemblies in the region.

Winners and Losers in Florida politics — Week of Jan. 20

Priti Patel: UK taking 'all the precautions' regarding coronavirus | Politics