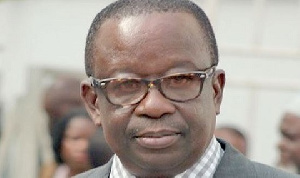 Minister of National Security, Albert Kan Dapaah represented the President His Excellency Nana Addo Dankwa Akuffo Addo to supervise the inauguration and swearing-in of Assembly members of the 7th Assembly of the Obuasi Municipal Assembly.

The event which took place at the Wesley Methodist Church on Thursday, 23rd January 2020 had Nananom, the Clergy, past political leaders of Obuasi in attendance. # His Lordship Justice Charles Gyamfi Danquah led the 29 Assembly members, both elected and appointed to swear the Oath of Office and Oath of Allegiance. The Obuasi Municipal Assembly has 19 elected Assembly members, 8 Government appointees as well as the Municipal Chief Executive and the Member of Parliament forming members of the Assembly.

Delivering the President’s speech after the Swearing-in ceremony, Honorable Albert Kan Dapaah said Assembly members are pivotal in ensuring that the Government delivers on its mandate and promises to the people.

He charged them to work with the Municipal Chief Executive to spearhead the implementation of government programs in the coordinated program of economic and social development policies (2017-2024) which include One District One Factory, One Village One Dam, Free Senior High School, Planting for Food and Jobs, among others.

He revealed that efforts are being made by Government through the Ministry of Local Government and Rural Development to improve the Internally Generated Fund of the MMDAs especially in the area of property rate. He entreated them to take advantage of automation and another innovative system that has been developed to improve the IGF of the Assemblies. He said, “if you help the Assembly to improve its revenue, it will translate into an increase in your allowances”.

The National Security Minister touched on Sanitation and Haphazard development bedeviling the Metropolitan, Municipal and District Assemblies. He said the Assembly members have a role in ensuring that the Assemblies strictly enforce their bye-laws to prevent people from building on waterways and also to ensure a clean and healthy environment.

To enable the MMDAs to function effectively, Hon. Kan Dapaah implored the Assembly members to be united and work diligently to improve the lives of the people they represent and create social accountability platforms such as town hall meetings and general community engagement to establish a strong linkage between duty bearers and the citizens.

The Municipal Chief Executive for Obuasi, Hon Elijah Adansi-Bonah whiles congratulating the Assembly members drew their attention to the fact that elections were over hence there was the need to put their social and political differences behind them and see themselves as one people with a common destiny.

Again, he pointed out that the Local Government Ministry has since 21st January 2020 come out with a new model Standing Order for Mmdas based on the new Local Government Act 936, so the Assembly members should grab copies to make their work easier.

In a related development, the Obuasi Municipal Assembly failed in its bid to elect a Presiding Member after two rounds of voting. The contest between Honorable Nathaniel Yoofi Duncan and Honorable James Adaboh ended in a stalemate with both contestants failing to get the required two-thirds (2/3)rd of votes to be declared the winner.

I’ll fail if you don’t support me

Akufo-Addo’s reasons for smaller govt a scam, he was forced by NPP MPs’ defeats – Umaru Sanda