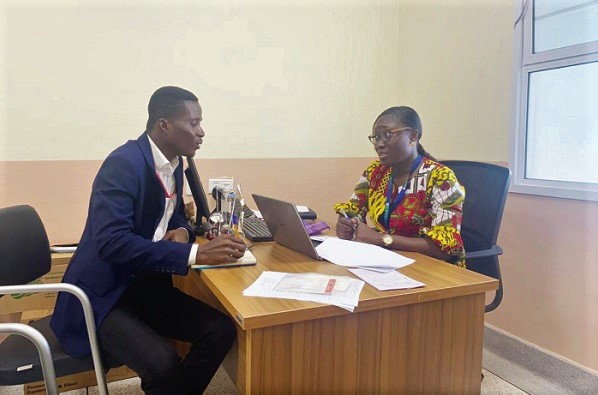 Dr Adwoa Kumiwa Asare Afrane (right), Specialist Paediatrician at the Department of Child Health of the Korle-Bu Teaching Hospital, interacting with our reporter

A Specialist Paediatrician at the Department of Child Health of the Korle Bu Teaching Hospital, Dr Adwoa Kumiwa Asare Afrane, has underscored the need for continuous research into tuberculosis (TB) to help reduce the increasing rate of TB cases, particularly in children.

She said TB, especially in children, was one of the top 10 causes of death worldwide and the leading cause of death from a single infectious agent (ranking above HIV/AIDS).

In an exclusive interview with the Daily Graphic, Dr Afrane revealed that the country recorded 14,289 cases of TB cases representing 47.3 cases per 100,000 populations in 2018, the latest records have indicated.

The specialist paediatrician indicated that though TB cases had increased, the 5.4 per cent notification rate for children was still below the World Health Organisation’s (WHO’s) estimate of 10 per cent.

“This implies that we are finding less TB cases than there are in the country and the continuous research for new vaccines and also to find more effective medication in the case of drug resistance will greatly help to control or curb the disease,” she indicated.

Dr Afane also said the need for continuous research was important because it helped to collate data that painted a clearer scientific picture of what was happening and thus helped in mapping up plans to deal with the issue.

“Data shows what is happening. If you don’t have data as evidence of the magnitude of the problem, then you can’t make a case to the stakeholders so there is a need for us to do more research.

“TB is more common in countries where people live in poverty and people are more likely to live in poorly ventilated rooms and over crowded conditions, which provide ideal conditions for the spread of the TB bacteria,” she stated.

She further advised staff of various hospitals to ensure contacts of people with active TB were assessed and managed properly while calling on Civil Society Organisations (CSOs) to continue in their advocacy campaign.

“The great challenge is to reduce transmission by identifying and treating patients with TB who are asymptomatic, unaware of their status, or unable to gain access to treatment.

“While much progress has been made over the past several decades, particularly in reducing mortality, TB remains a major infectious disease and all stakeholders must get on board in fighting the disease TB,” she added.

Dr Afrane said helping curb TB was also a social challenge and stressed the need for the government to commit more financial resources into research and improve the quality of housing in order to win the fight against the disease.

She also called for a stable economy as that would help improve upon the standard of living for people and promote healthy living and good nutrition to boost immunity to fight diseases such as TB.

Dr Afrane revealed that treatment for TB, one of the oldest diseases discovered as far back in the 18th century, was completed within six months although in some instances, it could be extended to a year, a situation that sometimes made patients to slack in the treatment due to the cost involved.

Though the National Tuberculosis Control Programme (NTCP) provide free nationwide treatment to patients, the other costs incurred by the patients make them give up along the way

“TB patients incur substantial cost and face financial hardships during the treatment period. For instance, they have to transport themselves to the hospital and feed themselves while on treatment.

“Parents who work have to sacrifice their time from work in order to bring the children to the hospital for review and that is indirect cost,” she said.

She, therefore, urged the government to consider enrolling TB cases on the NHIS to alleviate the cost of hospital expenses and the need for the drafting of new policies beyond providing just free TB treatment since the indirect cost incurred by patients in the treatment of TB was more.