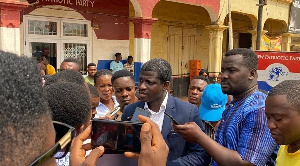 David Asante interacting with the media after picking his forms

Managing Director of the Ghana Publishing Company, David Asante has picked up nomination forms to contest the party’s parliamentary primaries in Nkawkaw later in April this year.

The MD who has won numerous awards in his three-year-term at the Ghana Publishing Company joins three others who have thrown in their hats to run on the ticket of the NPP in the Nkawkaw constituency.

The highly respected administrator and politician picked up his forms at the Nkawkaw Constituency Office in the Kwahu West Municipal District on Wednesday, ABC News can confirm.

Speaking to delegates and some supporters at the office, the confident MD and convener of the Let My Vote Count Alliance (LMVCA) promised to ensure a paradigm shift in activities in the constituency and ensure victory for the NPP in the 2020 general elections if given the opportunity to represent the party.

“I have picked a form and I am coming with the experience and the background and the fact that I have distinguished myself in government. Three years after the President appointed me as the youngest CEO, it’s been three years of a success story I have served Party and Government and paid my dues, it’s now time for me to pick up forms and put my plans before delegates,” David Asante said.

“In the right time, I will lay down my plans and projections for delegates, as well as the leadership style and the campaign policies. So far we want to assure everybody in Nkawkaw that they should look forward for David Asante who will bring a paradigm shift in leadership.”

David Asante has been hailed by many as a great administrator following his ability to transform the fortunes of the then ailing Ghana Publishing Company.

In September last year, David Asante was highlighted as one of the best performing Managing Directors in the country at a seminar organised for all Board Chairmen, Chief Executive Officers and Director Generals of State-owned institutions by the State Interest and Governance Authority (SIGA) in the Central Region.

Mr. Asante was also named among the Top 50 CEOs in the country by Avance Media in June 2019.

He’s seen as a key figure in the race for the Parliamentary candidature in Nkawkaw particularly due to his track record as the convener for the NPP and the Let My Vote Count Alliance as well as his exploits as The Managing Director of the Ghana Publishing Company.

South Africa’s move to allow farming of lions and other wildlife is a bad idea, scientists say | Science

South Africa’s move to allow farming of lions and other wildlife is a bad idea, scientists say | Science