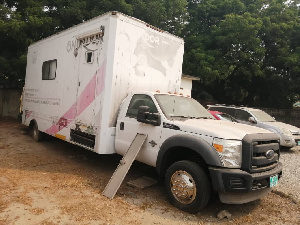 At the Black Stars Square in Accra, President Nana Addo Dankwa Akufo-Addo, Tuesday, commissioned and distributed 307 ambulances acquired by his government in 2019 to support health care delivery whilst some 8 mobile-clinic vans acquired by the erstwhile Mahama government remains parked at the Korle Bu Teaching Hospital.

The vans which were registered in 2014, were meant to bridge the gap between urban and rural healthcare by providing support for general medicine, ophthalmology, dentistry and audiology assessment in hard to reach areas.

According to a 2018 report by Joy News, the 8 vans were supposed to be the first of 40 that the Mahama administration planned on getting to serve some 46 districts in the country (4 for each of the 10 regions at the time).

The report further stated that even though by 2015 the previous government had obtained all the relevant equipment to make the eight vans operational, that did not see the light of day after the NDC lost power in the 2016 elections.

Former Health Minister, Alex Segbefia, who urged the NPP government to source for funds for the operation of the vans noted that even though the cost of operating them was high, they had proved useful on the few occasions they were used whilst the NDC was still in office.

Almost two years after the former minister made this call, the vans are still languishing at the same place they were parked.

Inscriptions on the vans are gradually fading away not because they have been busy, but because of the scorching sun they have had to endure over the years.

As they keep gathering dust, parts of vans have also started rusting due to their proximity to the sea.

President Akufo-Addo on Tuesday, 29th January 2020 commissioned some 307 ambulances for distribution to all constituencies in the country.

The commissioning of the ambulances was also preceded by some agitations over them being parked at the State House for several months while lives were being lost in several parts of the country due to the unavailability of vehicles to transport the sick.

Brexit: MEPs to vote on withdrawal agreement ahead of UK departure | Politics

Video of butter chai being made at Agra stall goes viral. Internet is disgusted