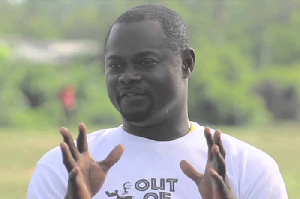 In the wake of the marital scandal that hit former Ghana player Odartey Lamptey and his ex-wife Gloria Appiah, names of a number of personalities were bandied about as having had affairs with the lady.

Among the names which were widely speculated is another former Ghana player and now coach of Black Stars Charles Kwablan Akonnor.

The rumors thrived for a while with neither Akonnor nor Lamptey addressing it.

Throughout the whole episode, Odartey Lamptey resisted attempts to comment on the alleged amorous relationship between his ex-teammate and now ex-wife.

However his latest comments could raise eyebrows as he has confirmed that he is no longer friends with Akonnor.

Speaking to Angel FM, Odartey conceded that the relationship he had with his once good friend he personally took to Sekondi 11 Wise has broken down completely.

Though he failed to confirm or deny knowledge of Akonnor’s alleged sexual escapades with his divorced wife, Odartey said “I’m sad to talk to about this issue but I thank GOD for giving me that courage to stand for whatever I have gone through to be able to come out and am moving on. Now I can boast and say these are my kids, I have a family and good wife.

“I have moved on personally. Everybody knows what happened and it happens in life. I have upgraded myself. I have a new family now and three kids and enjoying life now”.

Odartey broke down in the course of the interview and vowed not to work with Akonnor again.

Asked on if he will consider an offer to work with Akonnor as assistant coach of the Black Stars, Odartey said that his conscience won’t allow him to enjoy a fruitful working relationship with Akonnor.