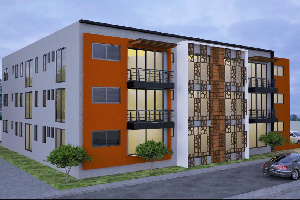 Emefs Construction Limited has begun work on a 400 affordable housing unit’s project at Gbetsile, along the Tema-Afienya road.

The Emefs Royal View Estate will include reasonable priced high class and middle class homes in addition to apartments, according to Mr Sitsofe Akpebu, Chief Executive Officer (CEO) of the company.

The company was among the exhibitors at the trade fair mounted alongside the just-ended 2020 Ghana Investment and Opportunities Summit held in London.

According to Mr Akpebu, the first phase of the project which involved the construction of two-bedroom expandable houses at customers’ specifications was currently ongoing.

“This comes with a two-year payment plan in beautifully crafted houses which would cover 43 acres,” he said.

The objective of the project, Mr Akpebu explained, was to build a model metropolitan community to contribute to industrialisation and national development.

Pursuant to that, he said, other sterling amenities, such as 24/7 secured gates for the housing units, a community police station and integrated home security systems would be provided at the estate to ensure the safety and comfort of residents.

There would also be water storage reservoirs, internet access, community playground, a gymnasium, schools and a club house and a shopping centre, Mr Akpebu added.

Mr Akpebu said that after executing that project in two years, Emefs Construction Limited would then embark on another housing project on 500 acres at Shai Hills.

He told the Ghanaian Times that some investors who visited Emefs Construction Limited’s stand at the trade fair had expressed interest in the projects.

About 500 representatives of various business concerns from the UK, Ghana and the Ghanaian diaspora attended the two-day Ghana Investments and Opportunities Summit which ended at the London Hilton, Park Lane on Wednesday.

The event was under the theme: “Accessing the African Common Market through Ghana – Technology, Digitisation and Industrialisation.”

I will replace 1D1F with staple processing zones - Mahama: Ghanatoday.net

Ghana is not a [email protected] to test, go & come back to correct your mistakes-Kusi B. to Mahama-ghanatoday.net

Titus has failed to show leadership in Tema East-Benjamin Ashittey