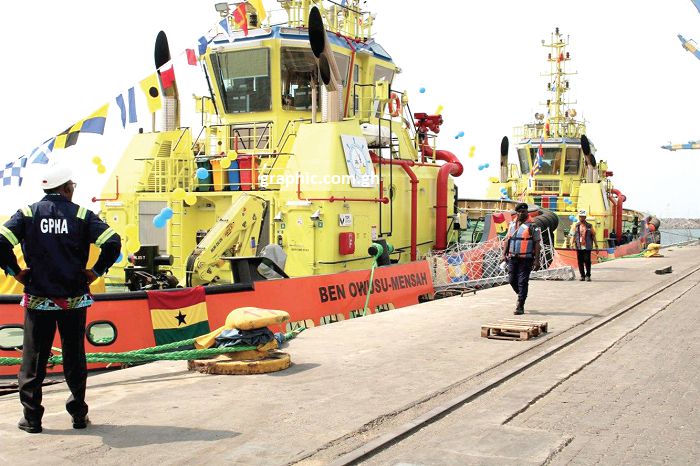 Two of the three tugboats that were commissioned. Picture: DELLA RUSSEL OCLOO

The new 80-tonne crafts, with a length of 33 metres that can hold eight crew members, were manufactured by the TOR Marine Group of Turkey and valued at £24 million.

The boats can perform multiple functions which include fire-fighting and rescue missions. They are also fitted with anti-pollution equipment and oil skimmers for pollution control.

The tugboats have been named after three former workers of the authority, namely Commander Kwaku Tsidi Dovlo, who served as Director-General from 1994 to 1998, Mr Ben Owusu-Mensah, who served in the same capacity from 2001 to 2008 and Mrs Josephine Asante, the former Marketing and Public Relations Manager of the Tema Port, who was murdered in her Emefs Estate home near Tema on January 13, 2019.

Speaking at the commissioning ceremony at the Tema Port, the Director General of GPHA, Mr Michael Luguje, said the operations of the terminal three, which received bigger capacity vessels, required tugs or crafts to match up to their weight to ensure efficiency.

According to him, although the authority previously had tugboats, their tonnage capacity were limitations to operations of bigger capacity vessels, “hence, our target was to get these ones before the opening of terminal three. However, the procurement processes delayed, hence the deployment of the 80-tonne tugs which had some challenges operating,” Mr Luguje explained.

The acquisition, he stressed, would ensure the authority’s marine technical support were well-equipped to move vessels quickly in and out of the ports since vessels made money when they were on the move.

The Chairman of the Board of Directors of the GPHA, Mr Peter Mac Manu, said the tugboats would enhance the revenue position of the authority.

He cautioned management and staff of the authority to endeavour to abide by the tight maintenance schedule to ensure that the vessels run their useful lives.

Commander Dovlo, who was present at the ceremony to receive the commissioned tugboats, said he was happy that majority of the authority’s plans captured during his time had been effectively implemented.

Mr Owusu-Mensah’s tenure saw privatisation at the port leading to the development of the terminal two which was previously managed by the MPS.

I appear on shows as a 'neutral' social commentator, not as your rep