Too many politicians are funded from ‘galamsey’ money – Kofi Bentil: Ghanatoday.net 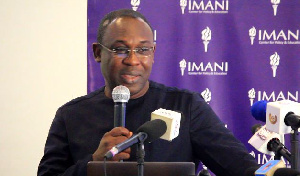 Kofi Bentil, Senior Vice President of Think Tank, IMANI Africa, says he is pessimistic about the fight against illegal mining known as ‘galamsey’ because too many politicians and leaders in the country are involved in the menace.

According to him, there’s only one solution to fighting ‘galamsey’ and that is to make a simple rule that wherever illegal mining is found, the District Chief Executive should be sacked.

“When they formed Operation Vanguard to stop ‘galamsey’, the same group of people have become the enablers and we’re not serious about ‘galamsey’ because our leaders are involved in it,” Kofi Bentil said on JoyNews’ News File on Saturday, February 1.

Meanwhile, the Minister of Environment, Science, Technology & Innovation, Professor Kwabena Frimpong-Boateng has said that about 90% of illegal small-scale miners (galamseyers) have ceased operations since the Operation Vanguard Team was established almost three years ago.

“I can say 90 percent, by and large, of those who are doing ‘galamsey’, I can say about 90 percent have stopped. These galamsey people are people who have no money to buy concessions, have no money to buy excavators; they get their shovels and things and go to the bush and start digging. That is what we call galamsey – gather and sell – these are people we are targeting. So far, we have about 20,000 or more who have moved from ‘galamsey’ into community mining. These are people who have been vetted in Ashanti, Eastern, Western, Upper East, Upper West and Central regions”, he explained earlier in an interview.

On the number of excavators impounded by Operation Vanguard, Professor Frimpong-Boateng said; ‘about 140 or so are in the custody of the committee’, contrary to the about 500 excavators that were alleged to have been seized by the Taskforce during Mr John Peter Amewu’s era as Minister of Lands and Natural Resources.