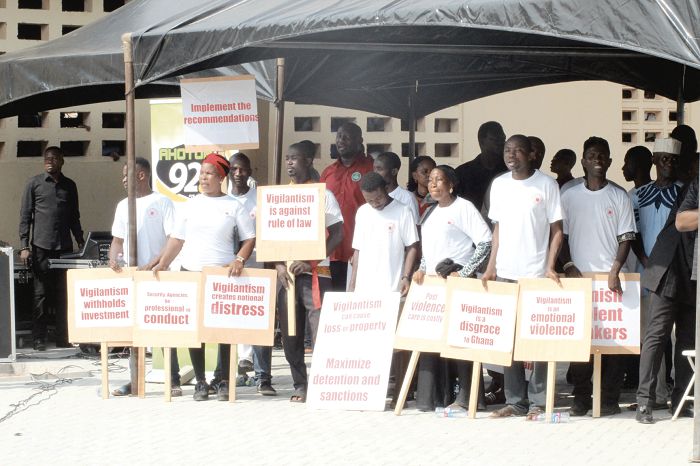 Some demonstrators with their placards

The Ghana Civil Society Organisations (CSOs) Platform on the Sustainable Development Goals (SDGs) has urged the government to implement the recommendations of the Emile Short Commission Report.

It said not much had been heard of the implementation after the government issued its White Paper on the Commission of Enquiry’s report which it described as “worrying” as far as the 2020 election was concerned.

At a press conference organised yesterday by the group to commemorate the first anniversary of the Ayawaso West Wuogon by-election violence, the Communications Officer of the Ghana Anti-Corruption Coalition (GACC), Ms Faustina Djabatey, who spoke on behalf on the group, said : “The culture of impunity related to electoral violence persists because culprits are not made to face the full rigours of the law,”

“Today is exactly one year since this unfortunate incident happened. The CSOs SDG Sub-Platform on Goal 16 believes that it is imperative we commemorate the day and more importantly take stock of lessons learnt.

It, therefore, called on all stakeholders to ensure that there would never be another Ayawaso West Wuogon incident in any of the electoral areas in the country.

Ms Djabatey underscored the need for political parties and stakeholders in the country’s electoral system to reconsider the issue of violence during elections historically adding that: “The peace and security of Ghana, a country touted as the beacon of democracy in Africa, is continuously being threatened by partisan vigilantism, which rears its ugly head, particularly during elections”

“We use this opportunity to remind the political parties that the peace and stability of this country is bigger than the ideology and personal ambitions of any individual” she stated.

Ms Djabatey also urged political parties to guard against inciting supporters to be violent, support the state institutions to do their work and channel complaints and grievances to the appropriate quarters.

She called on government to implement the Vigilantism and Related Offences Law which, according to her, would send a strong signal to potential offenders.

“We would like to remind our state security institutions that they serve at the behest of the people. They should resist partisan influence and show themselves to be neutral, fair and committed to the colours of Ghana, and none other.” Ms Djabatey added.

Members of the platform

Also known as the Short Commission, the Justice Emile Short Commission was established by President Akufo-Addo under Article 278 of the 1992 Constitution, to enquire into the events and associated violence that occurred during the Ayawaso-West-Wuogon by-election on January, 31, 2019.