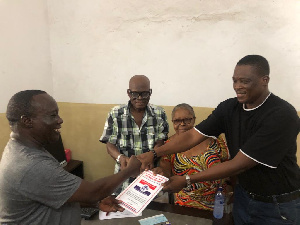 Erasmus Baidoo receiving the forms on behalf of the MP

Representatives of the Member of Parliament for Sekondi Constituency, led by the immediate past chairman for the constituency Mr. Erasmus Baidoo, have picked nomination form on behalf of Hon Andrew Mercer for the upcoming New Patriotic Party (NPP) Primaries to elect aspiring Parliamentary Candidates for the Non Orphan constituencies ahead of 2020 Election.

Speaking to the media, Mr Baidoo said the sitting Member of Parliament has the capacity to retain the seat for New Patriotic Party in the upcoming General Election should the party maintain his candidature.

He said, Hon. Mercer’s remarkable performance as a first time Member of Parliament deserves a second term to complete all projects he has started within the constituency.

It also includes sod cutting for the construction of fresh roads in some areas which have never witnessed asphaltic roads. This project will commence in March this year and be completed before the end of the year.

In the area of recreational as well as sports development, Hon. Mercer has successfully lobbied both GNPC and Ghana Gas to develop not one but two states of the art Astroturf community parks at Methodist Park and Adiembra park to be completed by mid-year.

On healthcare, Hon. Andrew Mercer has developed a strong collaborative arrangement with Auburn University in the USA since 2017 to provide annual medical screenings and medication for the Sekondi Constituency.

One of the key projects in the pipeline that is dear to him because he envisages it to be the anchor project that will attract other industries and transform Sekondi back to its glory days, is the proposed expansion of the Takoradi Harbour to Sekondi Naval Base with oil processing industries.

To make this vision a reality, Hon. Mercer has been working assiduously with the Ministry of Transport and the Ghana Ports and Harbours Authority (GPHA) to get this massive project commenced this year, considering that the designated area has been declared a port area by an Executive Instrument (EI) signed in July 2019 by His Excellency the President.

This will be welcome news to the teeming youths in Sekondi and its environs with respect to significant job opportunities.

Another key project in the pipeline that most citizens of Sekondi are passionate about and will help transform the economy of the city, is the construction of a new Market which will take advantage of the refurbished railways in Sekondi to spur trade in the city. Hon. Andrew Mercer is working diligently with key stakeholders to make the commencement of this project occur this year.

What is happening in federal politics?

Teschart KNUST brainstorm over how to lead CPP to victory: Ghanatoday.net