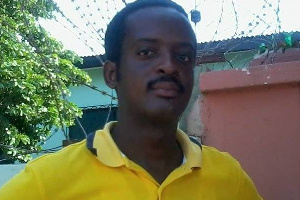 The ninth wonder of the world is happening in the Tema West Constituency, where a leading member of the opposition National Democratic Congress (NDC), is campaigning for votes for a member of the ruling party who is vying for the 2020 Parliamentary ticket of Tema West NPP.

Mr Lord Hamah, a former Propaganda Secretary of the NDC has asked delegates of the NPP to elect Kwesi Poku Bosompem, who is contesting the sitting MP, Carlos Kingsley Ahenkorah, during the NPP’s upcoming primaries.

“In life, one good turn deserves another; Kwesi Poku was helpful to the NDC in 2012, when we fielded our current National Chairman, Samuel Ofosu Ampofo, as the Parliamentary Candidate for Tema West. My brother Kwesi Poku mobilised votes and helped to raise funds for the campaign,” Lord Hamah said.

According to him, “even though Mr Ofosu Ampofo did not get to win the election, everybody knew that Kwesi Poku was more resourceful and instrumental in that campaign, which saw the NDC lose the vote gap a little… then even some members of the NDC.”

In a statement copied to the Ghana News Agency in Accra on Tuesday, the former propaganda Secretary who is also a former student leader at the University of Ghana said that Kwesi Poku was instrumental in helping Kempes Ofosuware to mobilise his campaign for the Tema East Parliamentary seat.

“Again, here too, even though Kempes was the NDC’s candidate, Kwesi Poku did not hide his admiration for him and the NDC and therefore gave his very best effort to Kempes’ campaign.”

Lord Hamah continues that, “the NDC is not a party of ingrates, we don’t forget the help from friends, and so now that Kwesi Poku is also contesting for election, it is only befitting that we also help him with whatever help that we can offer, that is all I am saying.

“Ghana’s democracy has matured enough, I believe, to accommodate the situation, where people from across different parties can help one another; I see nothing wrong with that.”

According to the NDC kingpin, he is personally preparing to start a door-to-door campaign to solicit votes for Kwesi Poku, who is a former Presiding Member and Assemblyman for the Halcrow Electoral Area.

Mr Hamah called on all NPP delegates to vote for Kwesi Poku Bosompem. “I assure them that if they put him on the ticket, I will personally go round to canvas NDC votes for him,” he said.

Lord Hamah said there was no clause in the NDC constitution that forbade campaigning for any candidate of one’s choice.

“Such a provision would be against the constitution of Ghana itself, which guarantees political freedoms and rights.”

Mr. Solomon Donkor, an NDC activist in Tema said: “Kwesi Poku helped the NDC in diverse ways and the time has come for us to also support him in appreciation”.

Koku Anyidoho 'deserts' Mahama, asks him to carry his own Airbus cross: Ghanatoday.net