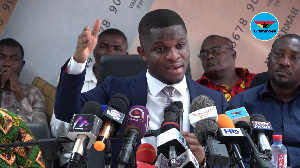 According to the party, the national campaign against illegal mining popularly known as ‘galamsey’ was coy to enrich members of the ruling party.

Addressing a news conference in Accra Thursday, National Communications Officer of the party Sammy Gyamfi said the recent discoveries of rot in the galamsey fight is a confirmation of the NDC’s suspicion over the years.

“This ‘galamsey’ scandal is a result of a grand scheme set up by the President himself to finance the NPP party. This is the reason why he populated the committees with top NPP officials like Ekwow Ewusu, Charles Bissue among others,” he said.

Speaking to Starr News, the Tamale Central MP said the content of the video is shocking and embarrassing.

“It was quite shocking, the video was damning. the task force was set up to provide cover for some persons to continue engaging in illegal mining.

“He, therefore, appears to be tainted and appears not to have the capacity to investigate the matter. By this time, I thought the minister would have resigned. The tape making round has dented, destroyed his image and bruised him. He should save the little integrity he has in him,” he said.

In the video, a voice that appeared to be Horace Ekow Ewusi, the NPP former Vice Chairman of the Central region, is heard discussing with someone who sounded as Prof Kwabena Frimpong-Boateng, the Minister for Environment, Science and Technology, how they can engage with some party folks on some mining concessions in order to raise money from the illegal activities to support the party.

Ghana Education a failure due to lack of consultation in policy making- NAGRAT: Ghanatoday.net